Barcelona went into the second leg of the semi-final fixture at Anfield up 3-0 and were cruising toward the final when Milner and the Reds spoiled the Spanish club's party and came back to book their spot in Madrid. 2019 marked the second season in a row in which Barca blew a huge lead going into the second leg of a knockout fixture, losing to Roma on away goals in the 2018 quarter-finals.

​​With the final just under a week away, ​Milner has revealed how Messi called him a 'donkey' after coming off the pitch at half-time, furious with the Englishman. Speaking with the ​Daily Mail, Milner claimed: "

"It translates as donkey but I think it’s also used in Spanish football as a general term for someone who goes around kicking people. I asked him if he was all right, but he wasn’t having it. I don’t think he realised I understood his Spanish."

The 33-year-old reiterated his respect for ​Messi but continued by revealing what the Argentine said to him. "He [Messi] said: ' 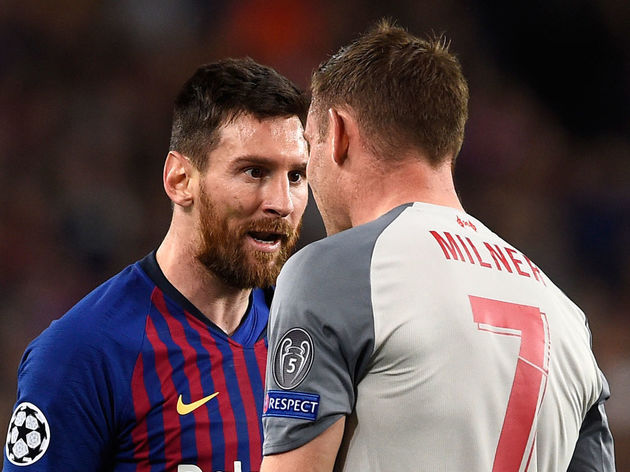 "If you try and stop him, you can’t be scared of being made to look foolish. I’ve done it. I’ve been nutmegged by him and it has been viewed a million times. I wasn’t the first and I won’t be the last. He’s an incredible player.

"But with players like that, you have to let them know you’re there and not let them have everything their own way. You just need to try to disrupt their rhythm. You don’t want to hurt him but it’s a physical game and, if he’s running the game, you try and knock him out of his stride. It’s part of the game, the mental side."

Milner and the ​Reds will look to avenge their loss in last season's ​Champions League final when they take on Tottenham Hotspur at the Wanda Metropolitano Stadium on Saturday.