Championship Playoff Final: 7 of the Best Editions Ever of Football's 'Richest' Game

​It has been described as 'the richest game in sports', and that has often been true as much in terms of footballing spectacle as of the (reported) £170m reward that awaits the winner.

The Championship playoff final is upon us once again, with Aston Villa looking to reclaim their place in the Premier League against Derby County.

Whether it is the huge financial imperative or the sheer passion involved in taking to the field at Wembley Stadium to fight for promotion, there is something about the playoff final which brings out the very best that the game has to offer.

Quality football can rarely be guaranteed at any level of competition, but this is one which provides ample assurances of drama, intensity, and absolute spectacle.

Here is a ranking of seven of the greatest ever Championship playoff finals in the modern format since 1989/90. This one certainly made up for a lack of goals with great drama. There can be no greater cause for sheer delirium than a last-minute winner, and ​Crystal Palace produced just that on the biggest of occasions.

The playoff final between the Eagles and ​Sheffield United had been a tight and tense affair at Wembley as both sides struggled to break the deadlock, with the showdown seemingly destined for extra time.

However, there was a late sting in the tale as Palace stunned the national stadium with a last-gasp strike from David Hopkin to seal his side's promotion to the top flight in the most dramatic style. In an encounter between two sides each making their first appearance in the First Division playoff final, ​Ipswich and ​Barnsley certainly made the most of the occasion and put on an enthralling show at Wembley.

A Richard Wright own goal gave Barnsley the lead after just six minutes, but Ipswich responded just before the half an hour mark with a Tony Mowbray strike. The scores remained level at half-time, but the game kicked into another gear after the interval.

Richard Naylor completed the turnaround early in the second half before Marcus Stewart added a third for the Tractor Boys just six minutes later. Ipswich appeared to be cruising towards the top flight, but a Craig Hignett penalty for Barnsley set up an intriguing climax in the last ten minutes.

However, Ipswich held on, and any hopes of a dramatic comeback from the Tykes were quelled as Martijn Reuser struck on the 90th minute to finally seal the win. A similar goal-fest ensued in the 2011 Championship playoff final, as Brendan Rodgers' bright young ​Swansea side overcame ​Reading with an emphatic display.

An early Scott Sinclair brace and a Stephen Dobbie strike fired the Swans into a comfortable lead at half time, before a Joe Allen own goal four minutes after the interval provided hope of a Reading fightback.​

Those distant hopes gathered real pace as Matt Mills added a second for the Royals, cutting the deficit down to just one goal with just over half an hour remaining before Sinclair completed his hat-trick from the penalty spot with ten minutes left to seal promotion for Swansea. In what was arguably the standout ​Championship playoff final of the last decade, Blackpool overcame ​Cardiff in a thrilling 3-2 victory in 2010 in which the quality of football was equal to Ian Holloway's box office press conferences.

Cardiff twice took the lead at Wembley in the first half courtesy of strikes from Michael Chopra and Joe Ledley, with Charlie Adam and Gary Taylor-Fletcher drawing Blackpool level at each time of asking.

The first 45 minutes had almost seen it all, but the Tangerines added one final sting just before the interval as Brett Ormerod fired his side into the lead for the first time. The second half was far less eventful, as Blackpool held on to seal their fairy-tale promotion to the Premier League. With many of the earliest playoff finals to be contested in a single game resulting in narrow scorelines, the showdown between Swindon Town and ​Leicester in 1993 proved to be the first real thriller of its kind.

Swindon had stormed into a 3-0 lead at Wembley, with quickfire goals from Glenn Hoddle and Craig Maskell giving the Robins​ a comfortable advantage either side of the interval, before Shaun Taylor added a third.

Against the odds, Leicester staged a remarkable fightback in the second half, with goals from Julian Joachim, Steve Walsh and Steve Thompson hauling the Foxes level with 20 minutes remaining. However, Swindon weren't to be denied, as Paul Bodin settled the tie late on from the penalty spot.

The game has also earned the ranking of 94th on Eurosport's list of the 100 Greatest football matches of all time. The same scoreline was remarkably repeated at Wembley just two years later, with ​Bolton and ​Reading playing out a seven-goal thriller on that occasion.

Reading raced into a two-goal lead within twelve minutes, courtesy of strikes from Lee Nogan and Adie Williams, but spurned the opportunity to put the game potentially beyond Bolton's reach with a third after ​Stuart Lovell missed a penalty just after the half an hour mark.

The game looked to be fading from Bolton's grasp before Owen Coyle struck with 15 minutes remaining, but Fabian de Freitas levelled the scores with just four minutes left on the clock, forcing the tie into extra time.

Bolton's momentum saw them seize the initiative, as a Mixu Paatelainen strike and De Freitas' second for the Trotters turned the tie on its head, as Jimmy Quinn's late goal came as scant consolation for Reading. 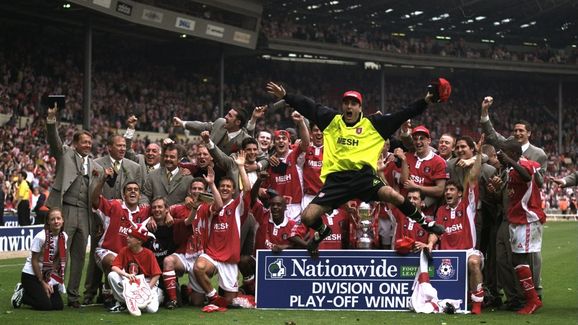 If seven goals seemed a crazy amount in a game of such intensity, Charlton and ​Sunderland went one better as they produced eight between them in a stunning playoff final in 1998, in which penalties were required to separate the two sides.

​Charlton took the lead in normal time through a Clive Mendonca, before second half strikes Niall Quinn and Kevin Phillips turned the game around for the Black Cats. Mendonca struck again to draw the Addicks' level with just under 20 minutes remaining, but Quinn struck again just two minutes later and looked to have won it for Sunderland.

However, late drama ensued, as a Richard Rufus goal for Charlton forced the game into extra time. Sunderland looked to take control of the tie as Nicky Summerbee added the fourth for his side, but Mendonca completed his hat-trick to rescue his side as the tie went to penalties.

Just as in both regulation and extra time, the two sides proved difficult to separate from the spot, with both scoring each of their first six penalties. However, Shaun Newton's spot-kick proved decisive, as Michael Gray's miss for Sunderland sent Charlton on course to the top flight.