FIFA 19: Ranking the New Bundesliga Team of the Season Cards

​It's week number two of FIFA 19's Team of the Season for Europe's major leagues, and this time it's the biggest and best players from the Bundesliga which have been given major upgrades.

There are 20 boosted cards which have been released in packs, surprisingly with Eintracht Frankfurt the team which has more players represented in the squad, while another two are available through Weekly Objectives.

So here's a quick rundown of every player featured in the Bundesliga Team of the Season, excluding players available through Squad Building Challenges, as well as a 90min rating to see if these players are actually value for money upon release. If you're desperate to add a Team of the Season goalkeeper to your Bundesliga side, then Eintracht Frankfurt's Kevin Trapp is the way to go.

But at more than double the price of Manuel Neuer - even his Champions League card is 50,000 coins cheaper - you might be better off investing your coins elsewhere. There's not an instalment of FIFA that goes by where Joshua Kimmich isn't a must-have super sub for any team.

Nothing's changed with his Team of the Season card, but with more in-game stats than any other right-back on the game, you need to find a way of getting Kimmich into that starting line-up. Soley from a FIFA 19 perspective, Marcel Halstenberg is undoubtedly one of the most unpopular additions to the Team of the Season.

Although his 85 pace isn't what players want at this stage of the game, he's the tallest gold left-back in Ultimate Team and will be perfect to stop those pesky back post headers during the Weekend League. If you're desperate for a quicker left-back in your Bundesliga side, then Eintracht Frankfurt wing-back Although Joshua Kimmich is considered as one of FIFA 19's best all-rounders, Danny Da Costa could be about to take the mantle after his Team of the Season card was released.

They have near identical stats throughout the card - except for shooting - but Da Costa's extra pace and being five inches taller should put him ahead of Kimmich as the Bundesliga's go-to right-back. 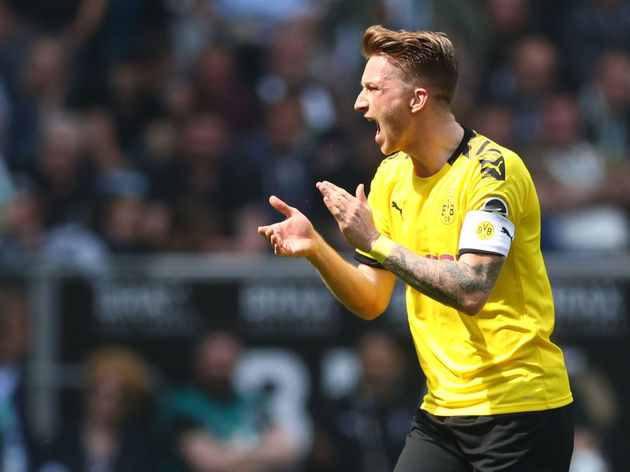 Well, I guess it's time for next Thursday's Weekend League rewards, because Marco Reus' stunning Team of the Season card is offensively expensive.

Given the number of special cards or Player of the Month releases that he's already had, spending 4,000,000 coins on Reus' Team of the Season card really doesn't seem to be worth it (even if it is one of the best cards which we've seen all year). If Reus is out of your price range, then maybe Borussia Dortmund's new signing Julian Brandt is the attacking midfielder for you.

Although he doesn't have the ability in front of goal as Reus, Brandt has the same passing and dribbling stats on the face of his card, so at a quarter at the price should be your preferred option for purely creative purposes. After scoring 17 league goals with Bayer Leverkusen this season, a record for a teenager in the Bundesliga, midfielder Kai Havertz has unsurprisingly picked up a massive upgrade in Team of the Season.

Although this release will be a huge "oh for f*** sake" moment for anyone who completed his Player of the Month card, Havertz's new card rivals Reus' as the best out of all the Team of the Season players. Jadon Sancho's Future Stars card has been one of the most difficult wingers to come up against throughout FIFA 19, and now the England international could be standing alone as the best card on the entire game on the right wing.

More than 90 in his pace, shooting, passing and dribbling to go along with his 5* skills, Sancho could even be featured in a few Premier League squads throughout the rest of FIFA 19's lifetime. Although in years gone by the quality of your front line was determined by pace alone, FIFA 19 has seen strikers like Robert Lewandowski become genuine options in attack - especially if you've mastered volleying it fro the edge of the box. Built in a similar mould to Lewandowski, Eintracht Frankfurt's

The votes have been counted, this is your @Bundesliga_EN Team of the Season! Available in #FUT from 6 pm UK. #BLTOTS #TOTS pic.twitter.com/EBQhyh4alD

Yann Sommer (122,000) - An outstanding acrobatic goalkeeper, but considerably shorter than even a lot of endgame strikers on FIFA 19.

Serge Gnabry (625,000) - It's only taken forever to actually get a Serge Gnabry card in his actual position, but now everyone who was priced out of Arjen Robben's End of Era card has got an option on the right side. Kevin Kampl (91,000) - Some outstanding stats but there's really nothing to shout about for a Team of the Season.

Axel Witsel (846,000) - Imagine Demirbay's card but for a defensive player. And much taller.

Kevin Volland (235,000) - Wait, Kevin Volland got a Team of the Season? This is why you shouldn't be allowed to vote in these things.