​Saturday's 5-1 win over Eintracht Frankfurt meant a lot more to Bayern Munich fans than simply wrapping up another Bundesliga title (their 29th to be precise) because it was Bavaria's last chance to wave goodbye to its two adopted sons,

A Debut to Remember Arjen Robben's £22.5m move from Real Madrid was a real turning point for the club, as they'd more often than not spent their transfer windows poaching players from smaller clubs across the continent.

Despite his high-profile arrival, however, Robben actually started his first match against reigning Bundesliga champions VfL Wolfsburg on the bench, with manager Louis van Gaal preferring to start with a front three of Ivica Olic, Mario Gómez and Thomas Müller.

Robben was brought on to replace Hamit Altintop at half-time, and it took the flying Dutchman just over 20 minutes to score his first ever goal for the club with a deflected shot from an acute angle.

He went on to find the back of the net again just 12 minutes later, combining with fellow substitute That Volley Against Manchester United 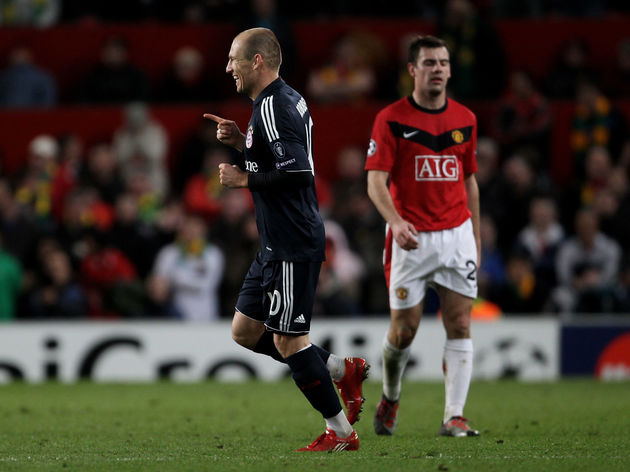 If you're from outside of Germany, then it won't be surprising to think of Arjen Robben wonder strike against Manchester United in the Champions League quarter-finals.

At the business end of his first season at Bayern Munich, and having scored in his previous two knockout stages matches against Fiorentina, Robben was actually forced to miss their first leg against United - where Ivica Olic's 92nd-minute goal secured a win - due to a muscle strain.

Wayne Rooney's away goal in Munich gave Manchester United hope and their quick start at Old Trafford put Sir Alex Ferguson's side firmly in the driving seat, at one point leading 4-2 on aggregate.

Olic scored on the stroke of half-time to leave Bayern Munich needing just one more goal to progress to go through on the away goals rule, but despite Manchester United seeing Rafael sent off, it wasn't until 15 minutes before the final whistle that Robben stepped up for the winner.

Manager van Gaal was already preparing to bring on Hamit Altintop in Robben's place, but just two minutes before the Turk would come off the bench, Bayern Munich's unmarked Dutch winger volleyed a Edwin van der Sar and While there have certainly been more beautiful goals from Robbery over the years, none have been as important as Arjen Robben's strike against Borussia Dortmund in the Champions League final at Wembley.

Most people forget that Franck Just how close can someone come to winning the Ballon d'Or without ever getting their hands on one? Just ask

"I didn't have my whole country behind me. I saw with my own eyes French people who wanted Cristiano to win. Did the Portuguese want

Just four per cent separated Europe's best players that year, with Ronaldo (27.99%) winning just his second individual award ahead of Messi (24.72%) and

Signing Off in Style For anyone even remotely connected with Bayern Munich, Saturday's match against Eintracht Frankfurt was an emotional rollercoaster.

It was a chance for