After two gruelling hours of high intensity football in the first ever all-English UEFA Champions League final, Chelsea are one kick away from European glory.

Everything had led to this moment for the Blues, Roman Abramovich had pumped millions into the club for one dream, one goal, one moment. This was that moment, and there was only one man for the job. Well, the reality was that there was probably more than one more for that job, but that man didn't care about that. This man had worked his whole career, no, his whole life, for this moment.

That man was none other than their captain, their leader, their legend. Mr. John Terry.

Chelsea's favourite son was about to give his side the achievement they craved the most, but that dream was about to turn to a dark, if not slightly hilarious, nightmare But how did we get to that point?

Well, ahead of the second all Premier League final between Liverpool and Tottenham on 1 June in Madrid, we take a look back at one of the biggest games in the history of English football 11 years on.

These two sides were not only becoming the two dominant forces in English football, winning all seven league titles available between 2005 and 2011.

In the red corner, you had Sir Alex Ferguson's ​Manchester United - an all conquering side who had just won their second consecutive Premier League title. They had already beaten their west London opponents on penalties in the Community Shield to open the season, and now they had the chance to come full circle and beat them to close out the season.

A second leg Paul Scholes goal was enough to see the Red Devils through against Barcelona Bayern Munich in 1999.

In the blue corner, to oppose the status quo you had Chelsea, who had a much more complicated route to Moscow.

Following victory over United in the 2007 FA Cup final, they knew they could beat them, but having sacked club hero Jose Mourinho in September after the relationship between himself and the owner had soured, they appointed Avram Grant. No one really knew who this dour looking man was, but he'd managed to drag the players to the final following a dramatic extra time win over Liverpool in the last four, and had one of the most feared defences in Europe to combat the brutal United front three of Wayne Rooney, Carlos Tevez and Cristiano Ronaldo.

They were the underdogs, but underdogs who had a history of beating their opponents and had spent loads of money on really good players, so confidence was high that they could claim victory in their first ever major European final.

Aside from the fact that those two teams would give any team in world football a run for their money, the needle and pettiness that had been evident between the two all season was very much on show in the Russian capital.

You had Paul Scholes bleeding after a clash of heads with Makelele, Nemanja Vidic going in for crunching tackles on Didier Drogba, and Wayne Rooney pushing Ashley Cole because of...well, just because.

But don't be fooled by all that, the football on show here was highly entertaining and of an outstanding quality.

But it was United who took the lead in the 26th minute when Wes Brown's left footed cross found Cristiano Ronaldo who powered home a header to claim his 42nd goal of an incredible season. Ferguson's men looked more likely to double the lead - especially on the counter attack - and when Petr Cech brilliantly saved not only Carlos Tevez's close range header, but also Michael Carrick's thunderous follow-up, the Blues were on the ropes.

That was until right on the stroke of half time, when Michael Essien's shot deflected nicely to Frank Lampard, who poked home a Chelsea equaliser. 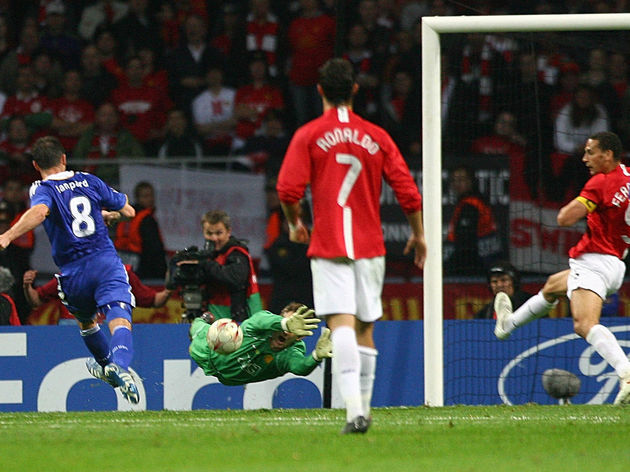 The West London side came closest to finding a winner in the second half, but Drogba's long range effort came crashing off the post.

Extra time arrived, and Lampard was agonisingly near to bagging his second, but his turning effort clipped the crossbar, before John Terry magnificently headed Ryan Giggs' goal-bound effort over the bar.

Eventually, tensions boiled over, and with the game heading to penalties, neither side could afford to lose one of their key spot kick takers.

So of course, that's exactly what happened. Drogba decided to slap Vidic in the 118th minute, which seemed a very stupid thing to do for more than one reason. But off the Ivorian went, right before the most important kicks in the history of Chelsea football club.

United went first in front of their own fans, Tevez scored, before Michael Ballack emphatically replied for Chelsea. 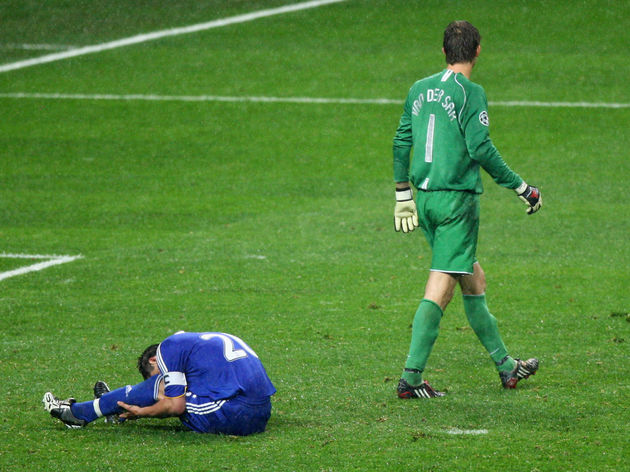 #OnThisDay in 2008 - Manchester United became Champions of Europe for a third time, beating Chelsea 6-5 on penalties after a 1-1 draw at the Luzhniki Stadium, Moscow in an all English Champions League final.

United would go on to win the Premier League the following season, but lose to Barcelona in the Champions League final in Rome.

That 2009 final would be Ronaldo's final United game before his world record transfer to Real Madrid, and he seemed to do alright for himself after that. Following his 13th Premier League title, Ferguson retired in 2013, probably recognising that the new superpower in English football would be their 'noisy neighbours' before too long.

Chelsea on the other hand, sacked Avram Grant within a week of the final, only to replace him with Brazil's 2002 World Cup winning coach L Terry didn't take a penalty that time, mainly because he was suspended for the final, but he still found the time to dress up in his full Chelsea kit when Drogba bagged the winning penalty - something he did a year later when they beat Benfica to win the Europa League.

As for Moscow, FIFA were clearly so impressed with the way they hosted the final that they kindly decided to give them the 2018 World Cup two years later, which everyone seemed really happy about. Really happy.