Mkhitaryan sat out Arsenal's trip to Azerbaijan earlier in the season after the Gunners were paired with Qarabag in the group stage, while he also missed a game in Azerbaijan during his Borussia Dortmund days for similar reasons. 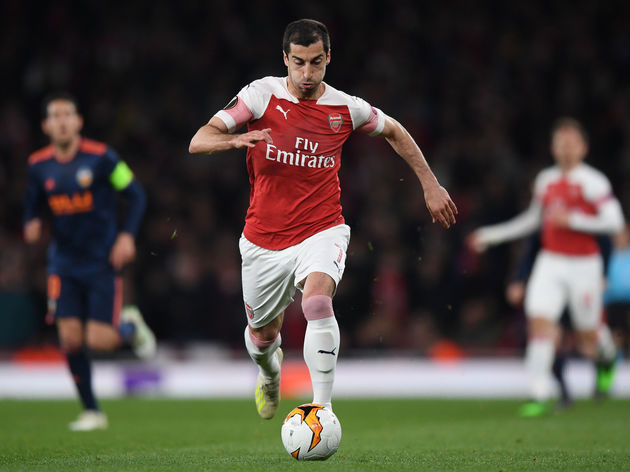 Earlier this week, Azerbaijan's UK ambassador, Tahir Taghizadeh, told Sky Sports, "What I can guarantee is that the Azerbaijan government will do everything what needs to be done and provide safety and security for every fan, player and staff member coming to this game."

Directly addressing Mkhitaryan, he added, "Go to Baku, you are safe there."

Yet Arsenal have seemingly concluded that Mkhitaryan will not be suitably safe and have taken the difficult decision to leave the 30-year-old out of the travelling squad. A statement published on the club's official website read, "We are very disappointed to announce that Henrikh Mkhitaryan will not be travelling with the squad for our UEFA Europa League final against Chelsea.

"We have thoroughly explored all the options for Micki to be part of the squad but after discussing this with Micki and his family we have collectively agreed he will not be in our travelling party.

"We have written to UEFA expressing our deep concerns about this situation. Micki has been a key player in our run to the final so this is a big loss for us from a team perspective.

"We're also very sad that a player will miss out on a major European final in circumstances such as this, as it is something that comes along very rarely in a footballer's career."

In response, a spokesperson from the Association of Football Federations of Azerbaijan (AFFA) said, following today’s announcement by Arsenal: “We are disappointed to see the statement from Arsenal that Henrikh Mkhitaryan will not be travelling with his team to Baku to participate at the UEFA Europa League final against Chelsea next Wednesday.

Having considered all the current options, we had to take the tough decision for me not to travel with the squad to the #UEL Final against #Chelsea [...] pic.twitter.com/3CPrTvLquy

"We very much regret this unwarranted decision taken, as we understand, collectively by Arsenal, the player and his family. Whilst we recognise the right to make a personal decision not to travel, we would like to reiterate that as the host country Azerbaijan has provided all the necessary guarantees required by UEFA to ensure the personal safety of Mr Mkhitaryan.

"There is no reason whatsoever to put in question the seriousness of these guarantees provided by Azerbaijan. Over the past decade a large number of Armenian athletes have taken part in various international sports events in Azerbaijan without any issues.

[...] It‘s the kind of game that doesn’t come along very often for us players and I must admit, it hurts me a lot to miss it.I will be cheering my teammates on! Let’s bring it home @Arsenal 🏆💪🏼💪🏼💪🏼 #uel #final #arsenal #chelsea #AFC #COYG pic.twitter.com/gnDA6oyolw

"Finally, we believe that this regretful decision will not affect in any manner the quality and the attraction of this great match. We look forward to welcoming both teams in Baku shortly."

Arsenal have already been critical of UEFA over the limited ticket allocation (6,000) provided to each club for the final, as well as the difficulty and cost of travel from London to Azerbaijan.