​Diego Simone insisted that he remains 'proud' of Atletico Madrid's high-profile quartet of departing players, after Saturday's 2-2 draw with Levante in their final La Liga game of the season.

Los Rojiblancos' underwhelming end to the season continued as this season's runners-up in the Spanish top flight were held to a frustrating draw in Valencia, though Simeone's side performed admirably to fight back from two goals down with ten men.

 As this @LaLigaEN season comes to an end, we thank you for your support throughout these 38 games, Atleti Family ⚪
❤ You are one of a kind ❤#AúpaAtleti pic.twitter.com/wVrpDb1pFf

Goals after the interval from Rodri and teenage forward Sergio Camello cancelled out first half strikes from Erick Cabaco and Roger Marti for the hosts at the Estadi Ciutat de Valencia, despite Angel Correa's sending off for ​Atleti.

The match was Los Rojiblancos' last game of the season, and also marked the final appearances for Antoine Griezmann, Diego Godin, Filipe Luis and Juanfran in Atletico shirts. As quoted by ​Goal, Simeone said after the game: "I am proud of the players who are leaving the club, as they have given us so much. 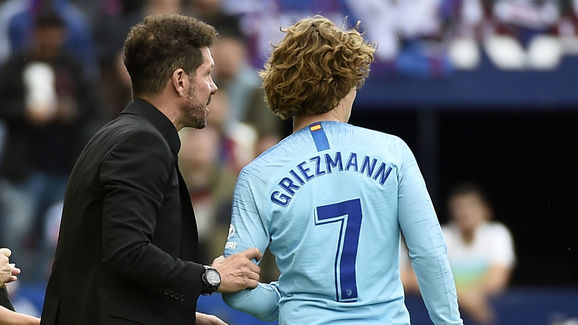 "The biggest thing that Filipe, Juanfran, Griezmann and Godin leave us is not trophies, but respect. In a sporting sense I love them so much."

Despite the disappointment of a below-par performance which only earned Atletico a point on Saturday, Simeone praised his side's attitude and battling qualities to fight back from two goals behind in the second half. "In the first half, Levante perhaps were a bit more focused and took advantage of their set pieces and breaks. In the second half, despite Correa's red card, the team answered as warriors, gladiators, people with pride. There are young and motivated players coming through and that excites us greatly."