​Manchester City manager Pep Guardiola has apologised to Liverpool for any offence caused by the clubs' players and staff following their Premier League title sealing win over Brighton.

The Citizens were travelling back to Manchester after retaining their title on the final day of the season, but have been at the centre of controversy after a video emerged perpetuating potentially distasteful chanting, mocking Liverpool's famed 'Allez, Allez, Allez' song.

City's version was alleged to make references to the Hillsborough disaster and the attack on Liverpool supporter Sean Cox before a Champions League tie with Roma at Anfield - but Guardiola insists that was never the attention, apologising to the Reds in the process.

"I'm sorry, I apologise. That was never our intention"

"It was not to offend the people about what happened in Hillsborough or the guy over what happened against Roma," Guardiola said in his ​pre-match press conference ahead of Saturday's FA Cup final with Watford.

"You think, just for one second, you could imagine we try to offend about these tragedies of the Liverpool world? It's incredible.

"We were happy for ourselves. If someone was offended, I'm sorry, I apologise, but it was never our intention. To win the Premier League is difficult against one incredible contender."

Guardiola continued by ruling himself out of running to become the new Juventus manager, after it was announced that Massimiliano Allegri will leave the Old Lady after five years at the helm, claiming that he is perfectly happy at the Etihad Stadium, insisting that he will be in charge of City next season. "I am satisfied working with this club, with the people here. That is how I feel today, but football changes a lot. Next season may not be as good, but I am going to be manager of Man City."

The 48-year-old also crushed rumours liking the club with Antoine Griezmann, who this week announced he would be leaving Atletico Madrid, responding when asked: "Man City is not going to buy Griezmann. We can't afford it. Barcelona don't have to worry."

Where is he going next? pic.twitter.com/fzRdVUzSrP

​​City go into their Wembley clash against the Hornets knowing that a win will see them become the first male side to win the domestic treble in the history of English football, but Guardiola has insisted that they will not take their opponents lightly.

He concluded: "Hopefully we can celebrate the FA Cup Final, the Premier League, the Carabao Cup and the Community Shield, on Saturday and especially Monday with our fans and the people.

"(Watford have) quality in front with Pereyera, Denney and Deulofeu. With Doucouré and Capoue, especially Doucouré, the way that turn up late into the 18-yard box. 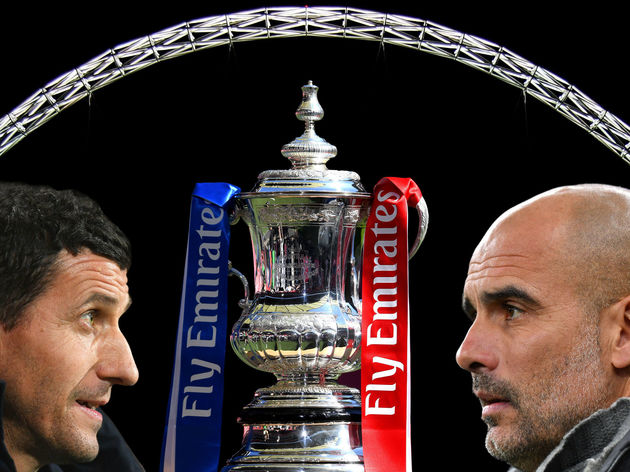 "They handle the defensive side well, with set pieces they have Holebas who is an incredible taker."