​Bayer Leverkusen midfielder Julian Brandt would favour a move to Borussia Dortmund over the Premier League if he was to leave the club this summer.

Tottenham Hotspur have been linked with a move for the 23-year-old, whilst Liverpool have been hotly tipped to pursue him in the past. However, links to the Reds have cooled since last summer. 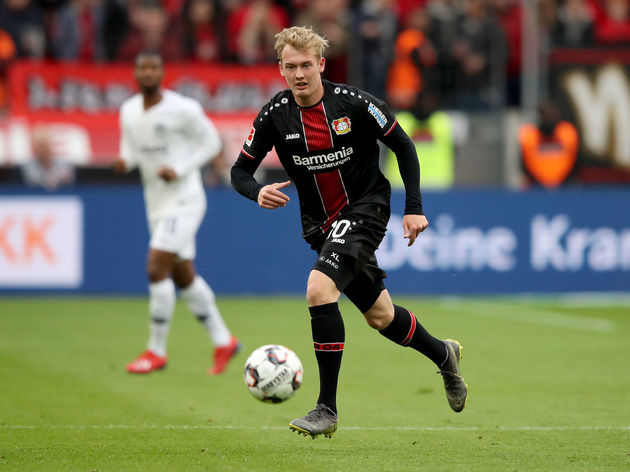 According to ​Sky Sports, Brandt would hope to reject the interest from the ​Premier League and seal a move to ​Dortmund instead.

His plan is to stay with Leverkusen if they qualify for next season's ​Champions League, which they can still do if they better Borussia Monchengladbach's result on Saturday, when they face Hertha BSC.

Brandt is also thought to be prepared to remain with the club even if they can only secure Europa League football, although serious interest from Dortmund may change that.

The towering midfielder, who is also comfortable on either wing, has two years remaining on his current deal but, with a reported release clause of £21.5m, he is expected to attract plenty of interest from some of Europe's biggest sides.

This season, Brandt has racked up nine goals and 17 assists in all competitions, proving why he is widely regarded as one of Germany's finest prospects.

In the past, the likes of ​AC Milan, ​Chelsea and ​Manchester United have tracked Brandt, and his stock has only risen since making his international debut in the summer of 2016. He has gone on to earn 24 caps for Germany, operating primarily as a substitute. Securing Champions League football could be crucial to Leverkusen's efforts to retain Brandt. Currently, they sit outside the top four, level on points with Gladbach in fourth. However, their inferior goal difference means they will need Dieter Hecking's side to drop points against Dortmund on the final day of the season.

If Leverkusen cannot overturn the odds, then the likes of ​Liverpool and certainly ​Spurs could certainly be keen to take advantage of the situation.