Burnley 2018/19 Review: End of Season Report Card for the Clarets

Burnley ended their season with a 3-1 defeat to Arsenal at Turf Moor on Sunday, which resulted in them finishing in 15th place - eight places lower than in the previous campaign.

Although this sounds like a dramatic decrease in form and could constitute as a failure for Burnley as a club, the truth is that Sean Dyche's men were hit with a reality check after overachieving in 2017/18 and succumbed to the pressures that come with juggling European and domestic football.

After a poor first half of the season left them in the relegation zone at Christmas, the squad pulled together and managed to go on an eight-game run without a loss, which saw them climb out of the drop zone and maintain their place in the Premier League for a fourth consecutive campaign. On the whole, Burnley fans will be pleased with maintaining their Premier League status, considering their flirtation with relegation at the half way point.

Supporters can't be blamed for dreaming of another season challenging for the top six after finishing in seventh place last term. However, considering the quality of the teams above them and the pedigree of talent those sides brought in over the summer, a repeat of this feat was unrealistic.

After their torrid start, which including drubbings by Manchester City and ​Chelsea, they did manage to secure some positive results against the top clubs when their form started to improve.

Draws against ​Manchester ​United and Chelsea the second time around, and victories over ​Tottenham and Wolves contributed to their survival in the relegation battle. Although an exit at the hands of ​Manchester City in the fourth round of the FA Cup drew little complaints from Clarets fans, it was their dismal performance against League One outfit Burton Albion in the third round of the League Cup which left a bitter taste.

After securing a pass to the third round thanks to their high league position last season, a tie against a side two tiers below them should have been a comprehensive start to a cup run, however things didn't quite go to plan. Ashley Westwood enjoyed his most productive season at Burnley, starting 31 games in the Premier League where he scored two goals and provided seven assists.

His consistent form in the centre of midfield didn't go unnoticed by both fans and teammates alike, as he was awarded the Players' and Fans' Player of the Year awards for the 2018/19 season.

He was pivotal in propelling his side out of the relegation zone during their unbeaten period at the turn of the year and also managed to score his first goals for the club. 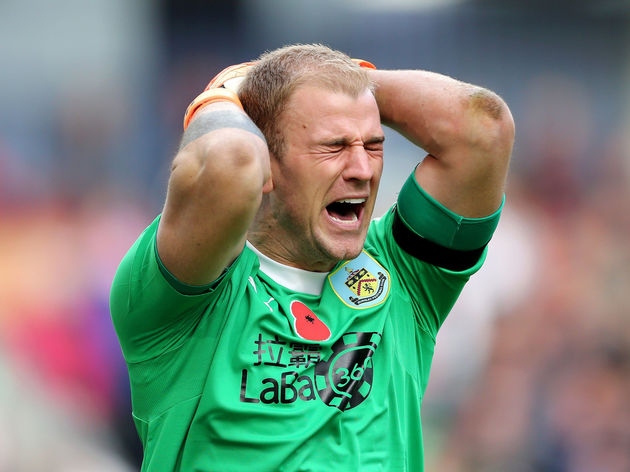 ​Joe Hart was recruited in the summer to cover for fellow England goalkeepers Tom Heaton and Nick Pope who were sidelined with injuries, however a once solid defence became extremely leaky with Hart between the sticks.

During the first 19 games of the season he conceded 41 goals and only managed to keep four clean sheets throughout the campaign. Although the full blame cannot be placed solely on Hart for Burnley's defensive frailties in 2018, the turn of the new year saw the reinstatement of Heaton which proved to be a deciding factor in Burnley's survival.

At a cost of only £3.5m, Hart's poor form won't be too much of a blow to he Clarets and at 31 years of age its tough to see him staying at Turf Moor next season. Sean Dyche is currently the fourth longest serving manager at one club in the top four tiers of English football, having been in charge at Burnley for over six-and-a-half years.

That is a pretty remarkable statistic considering the current managerial ins and outs and is testament to the work Dyche has done at Burnley over the course of this period.

It has been somewhat of a roller coaster ride since he took over in 2012. He secured promotion to the Premier League in his maiden season, only to be relegated back to the Championship after one term in the top flight. An immediate bounce back to the Premier League led to an unexpected seventh place finish, their highest since 1974, and has since managed to keep them in the top tier for a fourth consecutive season.

Dyche admitted after the last match of the campaign that his side struggled to handle the pressures of European and domestic football but was proud of how his team reacted since Christmas.

He can be praised for successfully guiding his side through a relegation scrap, maintaining Burnley's place in the Premier League. After overachieving in 2017/18 it would be unfair to punish ​Burnley for not putting in a repeat performance this season.

A rocky start caused many to tip them for a return to the ​Championship, however Dyche and his men pulled together to fight their way to safety and put in big performances against some of the top sides in the Premier League.

There are plenty of positives to take forward including the quality shown by multiple English talents. James Tarkowski and Heaton earned returns to the England squad and it will be vital for Burnley to keep a hold on them over the summer.

A tough campaign for the Clarets will be used as a learning curve and should give them plenty of room for improvement next season.