​In the FIFA 19 Ultimate Team calendar, there's only one day of the week that matters, and that's Wednesday. For Wednesday means one thing and thing alone: Team of the Week time.

Let's have a look at the highlights. Saturday was all about Christian Pulisic's farewell to the home crowd at ​Borussia Dortmund, and this initial narrative was confirmed when the American scored the opening goal against Fortuna Dusseldorf. But then it became the Thomas Delaney show.

The 27-year-old Dane was pulling strings left, right and centre, getting in on the goals himself with Dortmund's second. Apart from three points, and the chance to remain in the title race, Delaney's prize was to be handed a place in this week's TOTW, with a wonderful 86 card. It hasn't exactly been a seamless ride for ​Michy Batshuayi this season. A tricky loan spell at Valencia was cut short in January, after the Belgian notched just one goal in 15 La Liga games, and his spell at Crystal Palace had threatened to go down as similarly turgid before the end of the campaign came.

However, three goals in his final two games, including two against Bournemouth on the final day, have put some much-needed gloss on the period, and he's now got a FUT TOTW card to show for it! ​Newcastle rounded out the season nicely with a 4-0 demolition job of Fulham at Craven Cottage on Sunday. Jonjo Shelvey opened the floodgates in the ninth minute, and his teammates never looked back, with the onlooking Fabian Schar getting in on the act 52 minutes later.

But, after a spectacularly solid end to the season, it is the Swiss international who nabbed the last laugh, with a well-earned spot here, and an 87-rated card, no less! 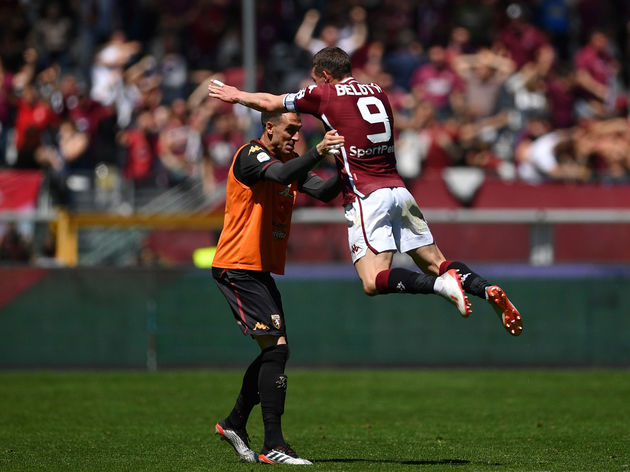 Andrea Belotti scored a brace against Sassuolo on Sunday, but all anyone can talk about are two shots he took in the 46th and 82nd minute, and only one of them was a goal. The first was a supremely struck bicycle kick that was smartly stopped by Andrea Consigli in goal.

The second was a superiorly struck bicycle kick that Consigli couldn't stop. Oh, and it was a winner. Three points and an 87 card were his rewards. Now, overhead kick stats are not front and centre of these cards, but just know his have improved immeasurably. ​Riyad Mahrez has had an up and down debut season at Manchester City, but he ended it in style with a stunning strike against Brighton, avenging that last-gasp ballooned penalty against Liverpool at Anfield.

Not that he needs reminding of that at this celebratory time. Sorry, Riyad, here's your 88-rated card! Much deserved, honest. We couldn't leave you without going through these fine few heroes who didn't make the cut above. Like Alessandro Florenzi (84), who got shushed by Cristiano Ronaldo, then shut him up with the first goal of Roma's 2-0 victory over Juventus. Or 37-year-old Real Betis hero Joaquin (84), who netted this ​absolute thunderbolt in the 97th minute to snatch all three points against Huesca.

And who doesn't like getting an update on Chelsea legend Salomon Kalou (82), who got two in a pulsating 4-3 victory over Augsburg for Hertha Berlin. Cracking stuff.