Liverpool midfielder Georginio Wijnaldum​ has claimed that winning the Champions League over Premier League rivals Tottenham would be a 'deserved' end to their 2018/19 season.

Having produced an emphatic comeback against Barcelona in the semi-final, Jurgen Klopp's squad prepare to face Tottenham in the final in Madrid on June 1. The ​Merseyside club were on track for domestic success as they beat ​Wolves 2-0 on the final day of the 2018/19 ​Premier League season, but the result was not enough to thwart the impressive performance of ​Manchester City who claimed a second successive title.

Although they failed to clinch the league's highest honour, ​Wijnaldum suggested that the Reds have a proven formula for victory which they will do their best to deploy as they face Mauricio Pochettino's ​side.

"But now we have a game that we can control, so we have to bring that to a good end. 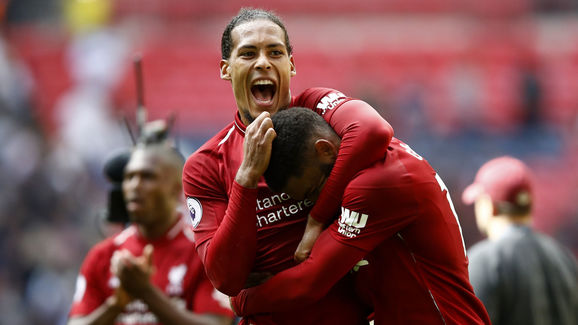 Wijnaldum's involvement in the 4-0 victory over Barcelona was integral to the historic margin of the scoreline, the Dutch midfielder scoring a quick-fire brace as he came on as a substitute for Scottish left-back Andy Robertson just after half-time.

2 - Georginio Wijnaldum is the first substitute to score twice in a Champions League match for Liverpool since Ryan Babel against Besiktas in 2007. He's also the first ever sub to score twice against Barcelona in the competition. Genie. #LIVBAR

"We gave it our all but in the end it wasn't enough."