Despite losing the second leg 1-0, Villa beat the home side 4-3 on penalties to take them one game away from a return to the Premier League.

Following their 2-1 victory over the Baggies on Saturday afternoon, Villa knew that avoiding defeat would book their place at Wembley for the second consecutive year. West Brom, meanwhile, knew that nothing but a win would do.

Despite the tension on both sides, it was a largely uneventful first half before Craig Dawson leapt highest from a long throw to nod the ball into the far corner with a little help from the woodwork.

The goal inspired the ​Baggies for the second half, as they came out firing for the second period and began to apply serious pressure. The chances began to pile up for the home side, as Matty Phillips and Chris Brunt both went close, and there looked like being only one winner.

The tie took another dramatic twist, as the experienced Chris Brunt earned himself a second booking, reducing his side to ten men for the second game in a row.

From then on, Villa took control and were agonisingly close to winning the match when Albert Adomah's close-range effort was magnificently saved by Sam Johnstone. Despite their efforts, neither side could find another goal and the game went to extra time. It was one-way traffic for the 30 minutes of extra time, but Villa couldn't make their dominance count. And so the game went to penalties and it became a test of who could hold their nerve. The home team left themselves with it all to do after missing their first two spot-kicks.

Despite Adomah missing his attempt for Villa, the rest were scored and the Villains are now on their way to Wembley.

With Dwight Gayle ruled out of their remaining playoff games, many wrote off West Brom's chances of making it to the final, let alone getting promotion. But tonight's game showed that the Baggies were in the top four for a reason. West Brom may rue the red card received by midfielder Chris Brunt ten minutes from time. The Northern Irishman's late tackle was one you wouldn't expect a man of his experience to make and it tipped the balance of the tie, leaving his teammates to face 40 minutes of defending.

The Baggies were then unable to create anything close to a chance in the remainder of the game, which ultimately tired the side before the penalty shootout. ​

Mason Holgate was in the thick of stuff from the off in this game, and his all-action performance at right-wing back inspired his side back into this tie. As well as keeping Anwar El Ghazi quiet for Villa's dominant period of the first half, Holgate grabbed the assist for Dawson's goal from a trademark long throw. 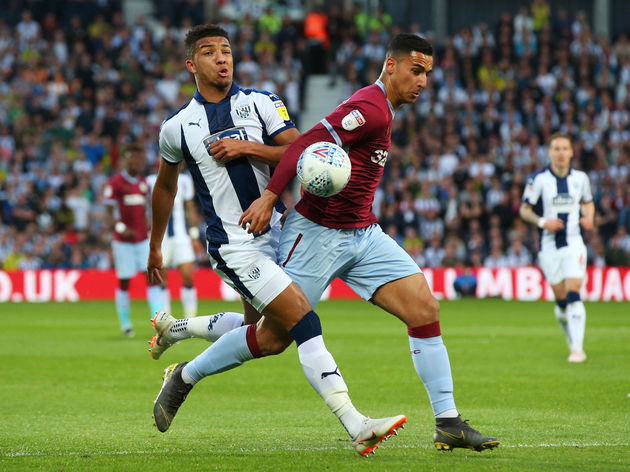 In fact, such was the resoluteness of the Villa back line, Holgate's launched throw-ins provided his side with some of their most dangerous moments. Even from open play, the Everton loanee's delivery was a point of real threat for the Baggies and he was unlucky not to put another assist to his name.

After Brunt's red card on 80 minutes, Holgate had to defend for the next 40 minutes, and that he did excellently. The youngster was brave enough to step up to take the Baggies' first penalty, but was unlucky to see it saved by Steer.

Villa came into this tie with a slender 2-1 lead and will have backed themselves to keep a clean sheet at The Hawthorns. Despite finding themselves behind in the first half, Villa coped very well when under pressure. They didn't make things easy for themselves, but Villa's cool heads made the difference in this second leg. The pressure was on most when the tie went to penalties, but the away side kept their heads.

Their mental toughness shone through, as they tucked away four of their five penalties very neatly. The win sees the Villans travel to Wembley for the second successive year, and they will be hoping to go one better than last time.

Jack Grealish's impact on the first leg was stifled by the rough treatment of Baggies midfielder Stefan Johansen. The second leg however was a different story as Grealish, despite receiving the same treatment​ from Johansen, had a much greater effect on the game.

Grealish is the best player in the Championship and whoever is 2nd isn't even close to him. Imo.

His relentless dribbling from midfield caused mayhem for the home side at times and he regularly won free-kicks in dangerous positions. Even as his side came under serious pressure from West Brom, Grealish's cool head was priceless at times, as his team mates began to look nervy.

This was epitomised in the penalty shootout when the young midfielder stepped up and tucked his penalty away to help his side win the tie and reach the play-off final once again.

For Villa, they can start organising their trips down to London as they prepare for the play-off final at Wembley on May 27th. They will be playing either ​Leeds United or ​Derby County, who face each other in the second leg of their semi-final on Wednesday night.

West Brom on the other hand face another season in the ​Championship. With 81 days until their next competitive fixture, the next date that Baggies fans have to look forward to is 20 June when their fixtures for the 2019/20 season will be announced.