2019 has the potential to be a truly huge year for Nikita Parris. The 25-year-old forward has already won trophies with England and Manchester City and now heads to the Women's World Cup in France this summer as one of the most in-form players on the planet.

She also plans to start next season with a big new club after a soon to be confirmed transfer.

Here's a look at everything you need to know about England's Golden Boot contender...

Parris began playing football at the age of seven just by kicking a ball around the garden at home, until a neighbour offered to take her to play at a local park. She then started to play organised football and was signed up to Everton's Centre of Excellence aged 12.

That was followed by a first team debut with the Toffees as a 16-year-old in 2010, while the emerging starlet was permanently promoted to the senior squad the following season. But with Everton relegated from the top flight Women's Super League in 2014, Parris knew she had to move on for the sake of her career in order to fulfil her vast potential.

"It was a hard choice to make, to be honest. I'd been at Everton for the past twelve years and they've given me everything. They've done everything for me. But I knew I had to make [the decision to leave] to progress in my career," she recalled when speaking to The Mixed Zone in 2017.

That led to a move to Manchester City in 2015, initially on loan, joining former Everton teammates Jill Scott and Toni Duggan in making the switch from Merseyside to Manchester. Parris has gone from strength to strength since arriving at City and most recently enjoyed a truly stunning 2018/19 WSL campaign. Her 19 goals broke the division's old scoring record for a single season and it was only the even more prolific form of Arsenal's Dutch star Vivianne Miedema that stopped Parris from setting a new record in her own right.

Now 25 years of age and about to hit her peak, Parris has decided the time is right to move on again, revealing that she will be starting afresh with a new club after the World Cup. The destination is not confirmed but Lyon and Bayern Munich have been heavily linked.

"After five years the moment has come to call time on my career as a Manchester City Women's player. I want to thank the fans for their support over the last five years. I've given this club everything and won every trophy domestically possible to win," Parris said via social media.

Parris represented England in four different junior age groups before making a senior debut in 2016, notably enjoying a prolific record for the Lionesses' Under-19 team. Her senior bow came during the qualifying process for Euro 2017 and she marked just her second appearance with two goals in a 7-0 win over Serbia in June 2016.

Parris has become an increasingly important part of the senior England setup over the last two seasons, netting six times during qualifying for this summer's World Cup - a tally that put her among the top scorers in the whole European section.

She also bagged a crucial goal in the SheBelieves Cup earlier this year, scoring England's second in the 2-2 draw with the United States that ultimately saw the Lionesses win the mini tournament for the first time ahead of the host nation.

Having made her debut in 2016, Parris was an obvious selection for England when the squad for Euro 2017 was named, although she largely played a back-up role at her debut tournament. 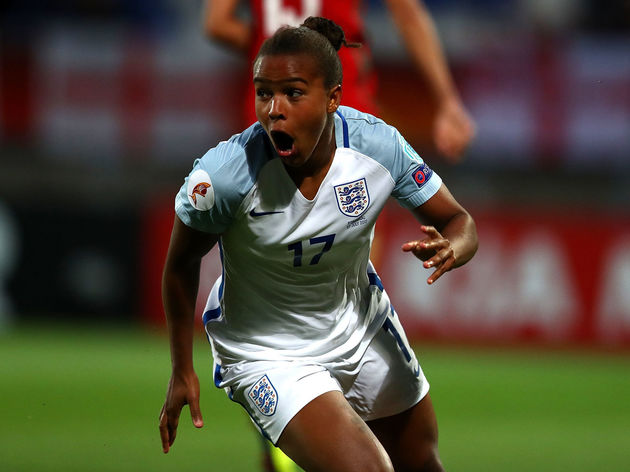 Parris only started one of England's five games - the third group game against Portugal - but she at least took her opportunity by marking it with a goal.

In 2019, the Manchester City forward is a more prominent figure and will wear England's number seven shirt as a starter, after her place in the World Cup squad was announced by David Beckham. She is one of 11 England player going to the World Cup for the first time.

Even playing for a struggling Everton, Parris was named in the WSL Team of the Year at the 2015 PFA Awards. She then began to start collecting trophies after joining Manchester City, winning WSL and League Cup honours with the Sky Blues in 2016. Parris is also a two-time FA Cup winner, after helping City hammer Birmingham in the 2017 final and claiming a second medal earlier this month as her team beat West Ham.

Despite Parris' free scoring form, City couldn't chase down with Arsenal in the 2018/19 WSL title race. The aforementioned Miedema then scooped the PFA Players' Player of the Year award, but Parris was recognised when she landed the FWA Footballer of the Year prize, only the second female player to win it after it was finally introduced for women in 2018.

To give something back, Parris set up the NP17 Academy in Toxteth, the part of Liverpool in which she grew up, to help and give opportunities to deprived girls from the area.

"There were plenty of opportunities but also plenty of challenges - you could go down the right or wrong path, depending on one moment," the player told ManCity.com earlier this year.

Was a pleasure to final meet the students of @NP17Ltd Academy today. Thank you for your time  pic.twitter.com/It1m8zdVIc

"I felt like I saw way too many young people on the streets doing nothing when they can be doing something so I wanted to set up the academy - particularly football because it's our national sport and give everyone equal opportunities," she added.

"I thought it could help people if they chose to do it. I'm not saying every single child who came to the academy has stayed, but a good 70% have and that's massive for me! As long as I can keep one child off the streets or change one child's life for the better then that's enough for me."