​After a difficult season which very nearly ended with a surprise relegation back into the Championship, Brighton opted to part ways with manager Chris Hughton less than 24 hours after their 4-1 defeat against Manchester City on the last day of the season.

The Seagulls failed to win any of their final nine Premier League games in 2018/19, scoring three goals along the way, and finished just two points ahead of Cardiff in a disappointing 17th place. The question for ​Brighton then, is where do they go next? If sources are accurate, it is being suggested that ​Swansea's Graham Potter is now the front runner for the vacant role at the Amex and could be set to join the Seagulls over the coming days.

Brighton & Hove Albion have confirmed that Chris Hughton has left the club with immediate effect.

​The Telegraph are reporting that Brighton are formally interviewing Potter on Tuesday and, if negotiations go smoothly, Brighton will only have to pay Swansea a minimal compensation fee.

Potter stepped into the limelight seemingly from nowhere in 2017, when he guided Swedish minnows Ostersund to the knockout stages of the Europa League - where they even managed to secure a staggering 2-1 win against Arsenal at the Emirates. Unsurprisingly, Potter then made the move to English football, taking over a Swansea side that were in dire straits after their relegation to the Championship.

On paper, Potter's brief reign at Swansea has been less than spectacular but, as should always be the case, context must be taken into consideration before overarching judgements are made about his debut season managing in England.

Of the three teams to be relegated in 2017/18, Swansea looked to be in the most precarious position. The Swans had the biggest turnaround of players and added little in the way of established talent to their roster.

Brighton one step closer to appointing Graham Potter as their new manager.

The Swansea boss will be interviewed today and, barring any late hiccups, is likely to take over at the Amex before the end of this week. https://t.co/m6zPBQZ2is

They eventually finished 10th and did so while playing an entertaining brand of attacking football that made the most of mercurial talents like Oliver McBurnie, Daniel James and Bersant Celina. By way of comparison, fellow relegated side Stoke - who looked to be favourites for the title at the start of the season - finished six places below and scored 20 goals fewer.

Potter's progressive approach meant that Swansea finished the season with an average of 56% possession, a figure which was only surpassed by Leeds, and their pass completion rate of 84% was the highest in the entire league.

Considering the fact that Swansea's young squad had little time to adapt to Potter's footballing philosophy, those statistics speak volumes about his abilities as a manager - despite being relatively inexperienced at the top level. 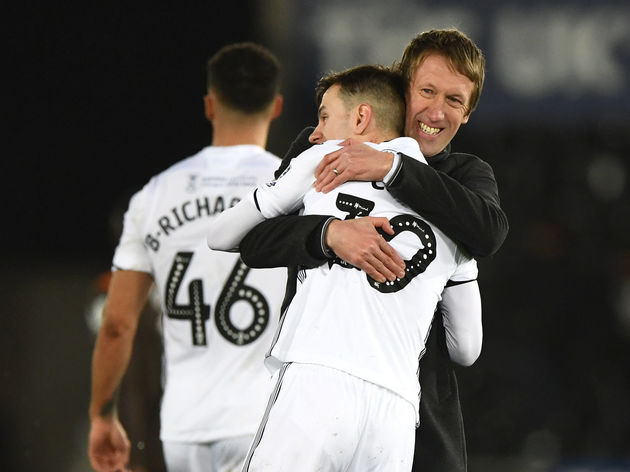 It may seem like a bit of a jump to immediately make the step up to the Premier League after just one season in the Championship, but his managerial record has been nothing but positive since he initially took over Ostersund in 2010, so there is no reason to suggest that he can't keep developing from here.

Brighton found themselves lacking any sort of identity towards the back end of the season and the Seagulls' poor recruitment has been at the root of their problems over the past few months. Big money signings such as Jurgen Locadia and Alireza