Here's a look back at every Gunners star to reach the 20-goal milestone in the post-1992 era... Gunners legend Ian Wright actually had his most prolific league campaign in an ​Arsenal shirt before the Premier League era began, although he did still break the 20-goal barrier twice after 1992.

Wright's consistency in front of goal, never scoring fewer than 15 league goals in any given year for Arsenal until his final season, was what made him so good. All this from a player who didn't sign a first professional contract until three weeks before his 22nd birthday. 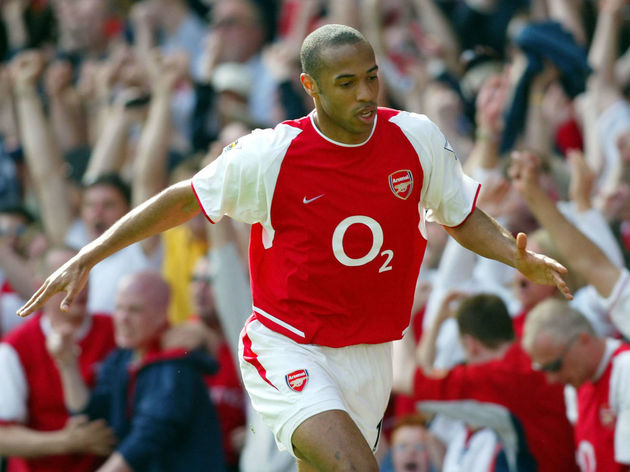 Wright had made himself Arsenal's all-time top scorer in 1997, but Thierry Henry went on to eventually shatter that record after arriving in north London from ​Juventus in 1999.

After 17 Premier League goals in both of his first two seasons with the Gunners, Henry managed a minimum of 24 in each of the next five. The Frenchman won the Golden Boot in four of those campaigns, with his best tally reaching 30 in the 2003/04 'Invincible' season. The 2007/08 season stands out as the most prolific season by far in the career of former Arsenal striker Emmanuel Adebayor. The Togolese frontman scored 30 times in all competitions and 24 in the Premier League.

Adebayor actually never managed more than 17 goals in a league season for any other club during his lengthy journeyman career, reaching that tally with Tottenham in 2011/12. Such was his quality, Robin van Persie might have scored 20 or more Premier League goals in more than just one season for Arsenal had he not struggled so badly with injuries for most of his time with the Gunners.

Van Persie managed to play all 38 Premier League games in the 2011/12 season and scored 30 times to win the Golden Boot, going on to join ​Manchester United that summer. ​Alexis Sanchez was a revelation for Arsenal after joining from ​Barcelona in 2014, but the Chilean forward took things to a new level during the 2016/17 season, scoring 24 Premier League goals and 30 in all competitions, by far the most prolific year of his career.

The Gunners had to bid farewell to Sanchez in January 2018 as his contract wound down, but the player has since scored just five times in 45 appearances for Manchester United. ​Aubameyang was the man Arsenal brought in to replace Sanchez last January, paying a club record fee of £56m to sign him from ​Borussia Dortmund.

The Gabon international hit the ground running and scored 10 times in his first half-season. He has since followed that up with another 22 in his debut full campaign for a share in the Premier League Golden Boot.