​Manuel Pellegrini has praised his West Ham side for achieving a 'realistic' tenth place finish after they beat Watford 4-1 at Vicarage Road on Sunday.

A brace from Mark Noble, as well as strikes from Manuel Lanzini and Marko Arnautovic, handed the Hammers a convincing victory over ten-man Watford on the final day of the Premier League season.

Speaking after the game on the ​club's official website, Pellegrini praised ​West Ham's finish to the season, in which they won their last three games, a run that saw the club score eight goals and secure a top half finish for the first time since the 2015/16 campaign.

“I’m very pleased because we have won the last three games - Tottenham away which was important for our fans, we finished with a win at home, and now we’ve done it away too, so I think it’s the best way to finish," he said.

1 - Manuel Lanzini has scored his first Premier League goal since the final day of the 2017-18 season (two goals v Everton on May 13th). Closer.

“I think to finish the first season in the top half of the table was realistic for where the team is at the moment. 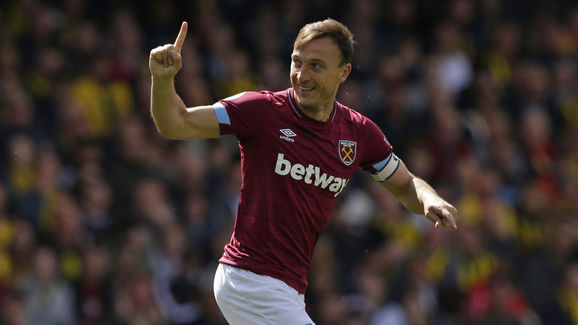 He added: “Mark Noble reflects absolutely what this club is. He was playing here when he was a young boy, he has had 15 seasons in a row playing most of the games and it was very good for him to score two goals today.

“He’s always talking with young players, with players who arrive here - he’s not only a good player but he’s also the leader and that’s so important for a manager.”