Koke's deflected opener ensured Diego Simeone's men had scored in every match at home this campaign and set his team on their way to what what was looking like a relatively straightforward victory. However, they were pegged back by a Pablo Sarabia volley in the 70th minute as they failed to give club stalwart Diego Godin a fitting farewell in his final home fixture. ​Atletico striker Alvaro Morata was played through one-on-one by Koke in the first quarter of an hour, but found his weak effort comfortably parried by the onrushing Tomas Vaclik. Still, the ​Chelsea loanee's miss did nothing to dampen the carnivalesque atmosphere at the

The Spanish international appeared to have broken the deadlock a

⏱ 31' | 1-0 | G⚽⚽⚽⚽AAAALLL! Our team takes the lead after a shot from @Koke6 is deflected into the back of the net. Vamos❗❕❗#AúpaAtleti #AtletiSevillaFC pic.twitter.com/rtG7pPhge3

The second-half was decidedly flat, neither side managing to take a stranglehold on proceedings, although Angel Correa's introduction did spur Simeone's team into life as the Argentine added impetus and energy.

He found the back of the net not long after arriving onto the pitch, though he suffered the same fate that befell Morata as VAR showed him to have mistimed his run by the slightest of margins. The 2014 La Liga champions ended up ruing that decision from the officials, albeit it being a correct one.

In the 70th minute Sevilla managed to find the equaliser, as Sarabia calmly placed a side-footed volley across the impressive Jan Oblak in the Atleti net, meeting a marvellous swinging cross from Franco Vazquez at the back post to bring Joaquín Caparrós' battlers level.

The former ​Real Madrid midfielder should have completed a startling turnaround within minutes of that deft finish, but blazed over when bearing down on Oblak. That proved to be the last clear sight of goal for either team, though the Slovenian did have to tip over a stoppage-time blast from Vazquez.

Check out 90min's breakdown of the encounter below.

Godin has spent nine glorious years in red and white following a switch from fellow Spanish outfit Villarreal. Though this was far from a vintage performance from the veteran, there were flashes of the kind of brilliance that has made him a heroic figure in Madrid. 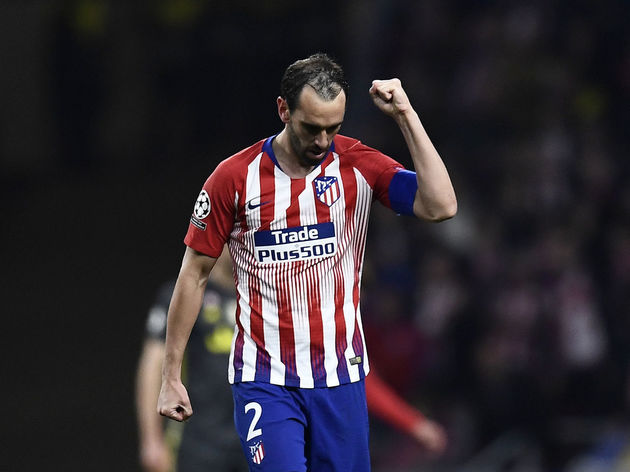 With the hosts having nothing material left to play for this term, the focus was always going to be on the departing Godin as he said goodbye to the adoring

This was a midfield masterclass from the Ghanaian, orchestrating Atleti attacks from his position in the centre of the park. His distribution was exquisite, carving open Partey was also fantastic when out of possession, hounding opponents and forcing mistakes in a dynamic performance. Displays like this in the Spanish capital demonstrate precisely why ​Manchester United are attempting to pry the academy graduate away from the club he has been with since a teenager.

He nearly doubled his side's advantage soon after the restart, but swept a first-time effort inches wide of the far post after latching onto an Antoine Griezmann cutback. Nevertheless, the miss did nothing to detract from an immaculate showing from Partey.

This is how much he means to them ⚪️@Atleti fans give legendary captain and defender Diego Godín a worthy sending off in his last match for the club!

Find me a better midfielder in La Liga than Pablo Sarabia this season. Very hard to do. 12 goals now? 13 assists. Unreal.

Atletico bring the curtain down on their season with an away match at lowly Levante next Saturday, with the side now guaranteed a second placed finish courtesy of Real Madrid's loss at Real Sociedad.