Chelsea secured a third place finish on Sunday afternoon, as they drew 0-0 with Leicester at King Power Stadium.

The first half ended goalless, with both sides missing big chances. Jamie Vardy waited too long to pass to a free Youri Tielemans, while Gonzalo Higuain missed an absolute sitter from six yards out as he mishit his shot in acres of space.

Leicester came out for the second half with more energy and urgency, as they pushed to break the deadlock. Vardy and Marc Albrighton aimed to hit the Blues on the counter attack, but David Luiz was there to keep them out.

The result, along with results elsewhere in the Premier League, sees Chelsea's place in third confirmed. The Blues had already secured Champions League football for next season with a win over Watford last Sunday, as they ended their domestic season with a draw.

Our 2018/19 season ends with a point against Chelsea #LeiChe pic.twitter.com/Qwcr9oBpeq

After mixed results recently, ​Leicester were hoping to end a difficult season on a high. They looked good in attack, playing their trademark style of counter-attacking football well. However they couldn't break the visitors down, as they failed to score for the second game in a row.

Despite a goalless draw in their end-of-season celebration, there was little to criticise the Foxes for. They stayed organised and disciplined in defence, keeping their opponents quiet inside their box, while attacking well and with purpose despite not scoring.

Brendan Rodgers will now begin looking ahead to the 2019/20 season, as he looks at what he needs to improve for the next campaign. After a largely uneventful game, the focus now turns to improving the squad, as the Foxes have to discuss what to do to push on for the European spots next time out. 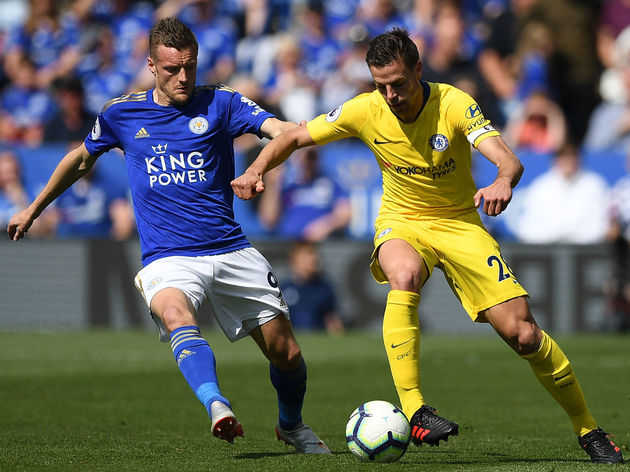 STAR MAN - Although he couldn't add to his incredible 18 league goals this season, ​Vardy was very good. He was Leicester's star man in attack, creating their best chances and worrying the Chelsea defence with his bursts of pace and decent efforts.

Looking for a breakthrough. 

​Chelsea travelled up to the East Midlands after a gruelling Europa League semi-final, where they played 120 minutes just three days ago. Maurizio Sarri made a few changes, the most notable ones being ​Eden Hazard dropping to the bench and Willy Caballero starting in goal.

In the game, the Blues got into the final third time and time again, but didn't seem to have the cutting edge to finish. Higuain and Pedro missed big chances, and despite having 14 efforts on goal they couldn't break down their hosts in a frustrating result.

Nevertheless, it brings an end to a strong domestic season, as Chelsea finish the season in third. Sarri's side should be pleased with the result, and although a goalless draw is not how they wanted to finish, the focus must now turn to this month's Europa League final.

STAR MAN - There wasn't much individual quality from the Blues, but ​​Pedro was decent in attack. He created many chances for the visitors and came the closest for them, as he produced a decent performance in the absence of Hazard for the majority of the game. Chelsea have one more competitive game to play, when they travel 3,000 miles to Baku to face ​Arsenal in the Europa League final on 29 May. Before that though they will fly to Boston, as they face New England Revolution in a charity match on 16 May.