West Ham pipped Watford to tenth in the Premier League after a convincing 4-1 win away against the FA Cup finalists on the final day of the season at Vicarage Road.

The away side went in front in fine fashion with a quarter of an hour played, Mark Noble evoking his inner Dimitri Payet to open the scoring. The Hammers' captain played a neat one-two with

It took just 11 seconds for ​Watford to pull one back in the second half, thanks to substitute Pablo Zabaleta's dismal back-pass being pounced upon by Deulofeu, with the Spaniard rounding Lukasz Fabianksi to give the hosts hope.

45:11 - Gerard Deulofeu's goal for Watford was the quickest at the start of the second half in the Premier League since January 2018 (also 45:11 - Marko Arnautovic v Huddersfield). Lively.

However, just as the Hornets' response was quick, Jose Holebas' recklessness was equally so. Antonio latched on to Felipe Anderson's through ball and the Greek defender pulled the ​West Ham man back when clean through on goal, receiving his marching orders as a result and now ineligible to play in next weekend's FA Cup final.

Despite the disadvantage Watford continued to press, but were put out of sight after Marko Arnautovic sealed the win 20 minutes from time. Ben Foster made a fine save to push Felipe Anderson's low effort onto the post, but the rebound fell kindly for the Austrian to tap home. 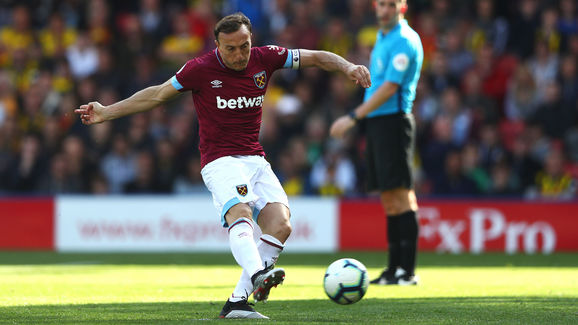 Kiko Femenia then fouled Antonio in the box, allowing Noble to score his second from the spot, sending Foster the wrong way to hand the visitors a comprehensive victory on the final day.

Javi Gracia has worked wonders in Hertfordshire this season, leading his side to a cup final and impressing with an attacking brand of football in his first full season at Vicarage Road. 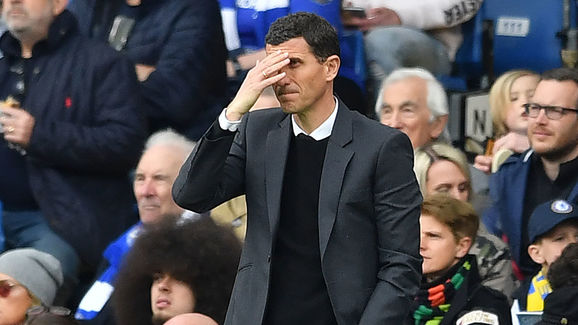 It was a mostly dominant display from the Hornets on Sunday, but they were caught cold on two occasions from good work by Antonio and Noble respectively in the first half before crumbling after the sending. While a top ten finish evaded them after Sunday's result, it will all be forgotten should they upset the odds and beat the Citizens at Wembley.

Gerard Deulofeu has scored 10 goals in a single season in one of Europe's top five leagues for the first time.

Unquestionably their key man heading into next weekend's FA Cup final, Deulofeu was a livewire against the visitors on Sunday, causing numerous problems to the Hammers back four.

Such is the 25-year-old's importance to the Hornets, he was hooked off after 60 minutes with Gracia having one eye on their trip to Wembley. His tenacity will be crucial next Saturday, something he demonstrated with the quick thinking to latch onto Zabaleta's mistake and give Watford hope.

It has been a season of frustrating inconsistency for Manuel Pellegrini's men. At times they have demonstrated their defensive guile and attacking flair in fine wins away at ​Tottenham, while equally putting in limp displays against Bournemouth and Huddersfield.

To improve next year additions will need to be made in the summer, but the foundations have been set by the Chilean manager to build a side ready to fight for a European place.

Mark Noble makes no mistake from the spot to make this a procession for the hosts, after Antonio was brought down while bursting into the box#PL #WATWHU

The return of Lanzini from injury has been a big boost for the east London outfit, who showed a cutting edge on Sunday and a ruthlessness in front of goal when presented with the opportunities they had.

West Ham have some player on their hands here. After a magnificent display away at Tottenham in their last away game, Diop followed that up with another commanding performance at the heart of the Hammers' defence. The £22m spent for the player last summer looks to be well spent, and he could easily have some of the ​Premier League big boys knocking on the West Ham door soon.

if Issa Diop isn’t valued at £50m by the end of next season i’ll throw my juul in the bin.

For the home side there is still plenty to play for as their biggest game of the season awaits as they take on Manchester City in the FA Cup final next weekend.

​West Ham, meanwhile, can begin planning for the summer transfer window before they take part in the Premier League Asia Trophy in July.