While the reigning champions from the tournament’s 1999 edition played host, it wasn’t originally planned to be held in the US. In fact, China were meant to host, as the inaugural World Cup hosts prepared to hold the competition for a second time.

However, four months before it began, FIFA made the decision to relocate the main event due to the outbreak of SARS, a respiratory disease that first appeared in China in November 2002. The hosting rights were given to the United States, as FIFA believed that their previous experience would help them organise the tournament well with short notice. 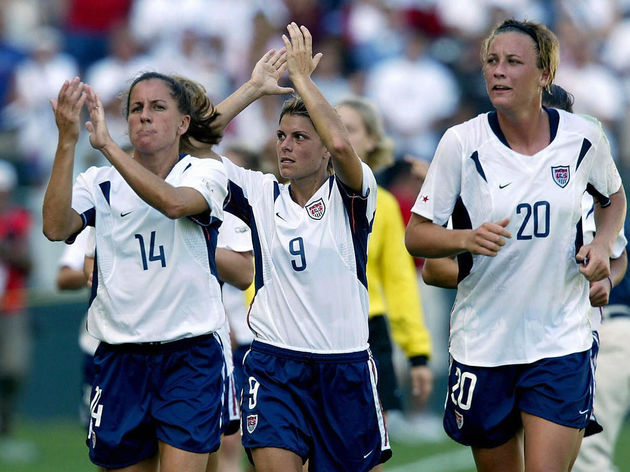 With 16 teams once again competing, the USWNT were eager to retain their title and win the World Cup for the third time. The US came into the tournament as the top ranked side in the world, with star players such as Abby Wambach and Kristine Lilly in manager April Heinrich’s ranks.

Despite their dominance, the Americans knew that would face tough competition on home soil. Second and third ranked Norway and Germany were determined to bring the trophy back to Europe, while China were hoping to avenge their final defeat four years earlier against the Americans.

Three teams made their World Cup debuts in America, as France, Argentina and South Korea entered the world stage. However, it was a tournament to forget for the trio, who were all knocked out in the group stage with the Koreans and Argentines finishing bottom of their tables with three defeats from three each. 1995 champions Norway got the tournament underway in Philadelphia, beating France 2-0 thanks to second half goals from Anita Rapp and Dagny Mellgren. The Gresshoppene qualified from Group B behind fellow tournament favourites Brazil, who comprehensively beat them 4-1 in Washington.

The USWNT had to wait until the next day to begin their campaign, as the hosts defeated Sweden 3-1 in the capital with goals from Lilly, Cindy Parlow and Shannon Boxx. Further victories over Nigeria and North Korea saw Team USA top Group A in style, with the Swedes joining them in the knockout stages.

Group C saw the strongest performers of the group stage, as Germany cruised into the quarter finals. Under Tina Theune, Die Nationalelf beat Canada, Argentina and Japan to qualify in style, scoring a record 13 goals and conceding just once to Argentina’s Yanina Gaitan in their 7-1 thrashing over the South Americans. 25-year-old striker Birgit Prinz led the German line, scoring four times in the group stage to begin her tournament in fine form. Canada joined Germany in the next round, recovering from their opening defeat to the Germans to secure back to back wins. Then ranked 12th in the world, Even Pellerud’s side qualified for the World Cup knockout stages for the first time, having been knocked out in the group stage in their two previous attempts.

Finally, China topped Group D with two wins and a draw, but struggled to find the back of the net. They only managed three goals in their group stage campaign, which was the least scored by any of the eight quarter finalists. Nevertheless, Ma Liangxing’s side were into the final eight, and along with Russia made up the quarter finals.

First up, fifth ranked Sweden faced sixth ranked Brazil on the first day of October. Marta’s penalty cancelled out Victoria Svensson’s strike, before Malin Andersson scored the winner eight minutes into the second half. Amid Brazilian heartbreak there was jubilation for the Swedes, who became the first semi finalists. 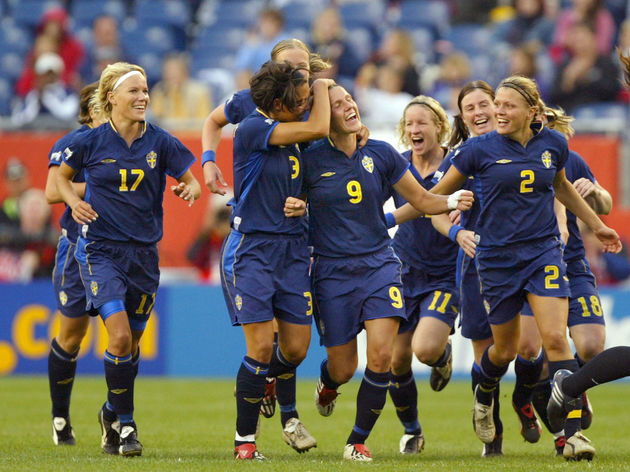 Later that day the hosts were back in action, as the US met Norway in Foxborough in a repeat of the 1991 final. Abby Wambach’s first half header from Kat Reddick’s first half cross was the difference, as the USWNT prevailed 1-0 to qualify for the semi finals for the fourth time in a row.

Germany took their tournament goal tally up to 20 with an astounding 7-1 thrashing of Russia, with Prinz and Kerstin Garefrekes scoring braces in Portland. However, it was Canada who pulled off the shock of the quarter-finals, as the lowest ranked side left in the tournament beat China 1-0 thanks to Charmaine Hooper’s seventh minute strike.

The first semi final was set to be a cracker, as Team USA welcomed Germany to the PGE Park. It was certain to be a game to remember, as the in form hosts and the free-scoring Germans battled it out for a place in the World Cup final. Die Nationalelf broke American hearts as they ran out 3-0 winners, as two stoppage time goals sealed their berth in the final. Sweden and Canada faced off to decide who would meet Germany, and it took until the 64th minute for Canada’s Kara Lang to break the deadlock. The Swedes did not give up, and goals from Malin Mostrom and Josefine Oqvist in the final 11 minutes secured a 2-1 win and sent the Scandinavians into their first ever final.

After the USWNT concluded their tournament by beating neighbours Canada 3-1 in the third place play off, it was time for the main event - the World Cup final. 26,137 were in attendance at the Home Depot Center, as Germany and Sweden faced off in the showpiece match.

Sweden struck first in California, as Hanna Ljungberg slotted home in the 41st minute. However, just moments into the second half the Germans drew level, through Maren Meinert’s well taken finish. It ended 1-1 after 90 minutes, meaning that the final would be settled via a golden goal or penalties. Eight minutes into extra time, there was a winner. Renate Lingor crossed the ball into the box, and substitute Nia Künzer executed one of the most powerful, accurate headers to power the ball past Caroline Jönsson and send millions of Germans into bedlam - Germany had won the World Cup for the first time.

Germany became the first team to win both the women’s and men’s World Cup, with Die Mannschaft having won three times in the men’s competition at that time. Prinz stole the headlines in America, with her seven goals in six games helping her win the Golden Boot and the Golden Ball. Despite overall attendance figures halfvng from the 1999 tournament and the location having to be relocated 7,000 miles across the world, it was a fantastic tournament and wonderful celebration of football. With the 2003 Women’s World Cup going down in history, we can certainly look forward to next month’s edition in France.