Liverpool know that only a win will give them a chance of finishing ahead of Manchester City, who must drop points in their final game against Brighton to open the door, and the return of Salah will be a huge boost in trying to avoid a late banana skin and questions of 'what if?'. 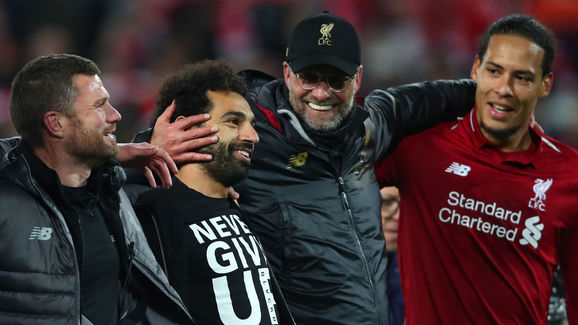 The Egyptian was forced to sit out midweek's historic 4-0 win over Barcelona after suffering a concussion, but the Liverpool Echo claims he is 'expected to be passed fit' to face Wolves.

Salah has scored 26 goals in all competitions in his second season as a Liverpool player. He hasn't quite hit the same incredible heights of the 44 he managed in his debut campaign, but 22 Premier League goals have still put him in pole position to win a second Golden Boot and become only the fifth player in history to retain it outright.

Salah will also be hoping for fonder memories of the Champions League final this season after a shoulder injury brought about by a forceful challenge from Sergio Ramos resulted in him having to be withdrawn in the first half last year, with Liverpool going on to lose to Real Madrid.

But while Salah will be okay to face Wolves this weekend, there are potential doubts over the involvement of Andrew Robertson, who limped out of the Barcelona game at half-time, and Roberto Firmino, who was forced to sit it out completely.

Jordan Henderson is also carrying a knee problem and will be assessed, while Naby Keita has already seen his season ended as a result of a tendon issue sustained earlier this month.