​Chelsea set up an all-English Europa League final with Arsenal following a hard-fought semi final win over Eintracht Frankfurt that ended on penalties at Stamford Bridge.

After a frenetic opening, which included but wasn't limited to a penalty shout, an off-the-line clearance and a wonder save from Kepa Arrizabalaga, the Blues finally grabbed the lead through an excellent goal from Ruben Loftus-Cheek in the 28th minute. 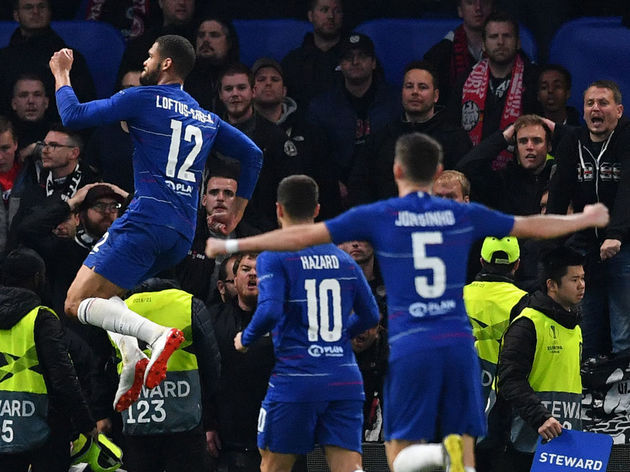 After some dazzling dallying from Eden Hazard on the left flank, the Belgian finally bought the time and space to turn and play in the Englishman, who prowled towards the goal with confidence before showing why with a cute rolled finish into the far corner.

However, it took the visitors just three minutes of the second half to get back into the tie with, surprise, surprise, Luka Jovic providing the crucial score. David Luiz ineptly went ball-hunting after the Serbian had chested it back to his teammate, leaving Jovic with just Kepa to beat when the ball was returned, and the tie was level.

After a second half full of bluster, but no breakthrough, extra time beckoned, whereupon the intensity failed to relent. Twice Chelsea squandered promising breaks with a poor final ball, before Luiz improbably found redemption with a wonderful goal-line clearance following a better-executed Frankfurt break.

Davide Zappacosta then produced similar heroics to deny Sebastian Haller once more from scoring. Cesar Azpilicueta thought he'd won it when he smuggled the ball in with his shoulder after some flapping from Kevin Trapp, but the keeper was adjudged to have held the ball before the Spaniard snuck it in. And so to penalties, where, after three well-taken efforts to start off with, Azpilicueta faltered first to hand Franfurt the advantage. This was capitalised on until Martin Hinteregger went for power, but couldn't get it past Kepa's iron-clad leg. After Luiz restored parity, Kepa was there again to thwart Goncalo Paciencia, allowing Hazard to book Chelsea's place in the final with possibly his final touch at the Bridge.

Check out further analysis of the game below.

While it won't have been the most pleasing night for Maurizio Sarri - their passing was uncharacteristically (or maybe characteristically, depending on where you are with Sarri-ball) wayward, and their energy levels seemed to dip just as their opponents came to the fore - the resilience was there, where it hadn't been before.

Ultimately it came down to penalties, and therefore nerve, and that was shown in up in the titanic bottle displayed by Kepa in goal and all four penalty scorers (Barkley and Jorginho were the other two who went previously unnamed).

Despite all the uproar surrounding this season, Sarri, having already secured Champions League qualification, has booked himself a second Cup final, and it was fitting that Hazard provided the final touch. Full English here we come.

9 - Ruben Loftus-Cheek has been directly involved in nine goals in his last 14 appearances for Chelsea (4 goals, 5 assists); as many as in his previous 45 games for the Blues. Thriving.

STAR MAN - Once again, Stamford Bridge's prodigal son, Ruben Loftus-Cheek, was excellent, and the boos that erupted around the ground following his swapping for Ross Barkley in the 85th minute tell you everything you need to know about the impact he had, as he continues to show why he's Chelsea's most complete midfielder. Jorginho was also impressive, putting in the best off-ball display of his Blues career, but it has to be that man Kepa, who came up with the game's two biggest moments when it mattered most.

Chelsea will look to finish their Premier League campaign on a high with a win at Leicester City, before priming themselves for this eagerly anticipated all-English Europa League final with Arsenal.

Frankfurt, meanwhile, will round up their Bundesliga campaign with clashes against Mainz, Bayern Munich and Wolfsburg, with a top-four place still very much on the line.