Borussia Dortmund host mid-table Fortuna Düsseldorf at the Signal Iduna Park on Saturday afternoon as they continue their feint hopes of ousting Bayern Munich at the top of the Bundesliga table.

"Although the Bremen game was a disappointment we have to move on and prepare for the next. Dusseldorf is not a team that can be overlooked, we have to focus to win our last match at home." pic.twitter.com/aivXRAHxKs

However, Lucien Favre will be hoping that third-placed RB Leipzig can add another dramatic twist in the title race by beating Bayern and ensuring that the destiny of the Bundesliga crown will be decided on the final day.

After letting a two-goal lead slip at Bremen last week, the Black and Yellow will need to ensure that they come away with all three points, anything less and a Bayern win would see the Bavarians lift the trophy for a seventh consecutive year.

Fortuna Düsseldorf's return to first-division football has been a successful one and they will go into Saturday's clash with no fear, something which could make Saturday's game an entertaining one.

Dortmund's captain Marco Reus will serve the second game of his two match suspension after being sent off in the 4-2 defeat to arch rivals Schalke. Reus’ teammate Marius Wolf, who was also sent off in the fiery fixture, will be suspended until the end of the season. 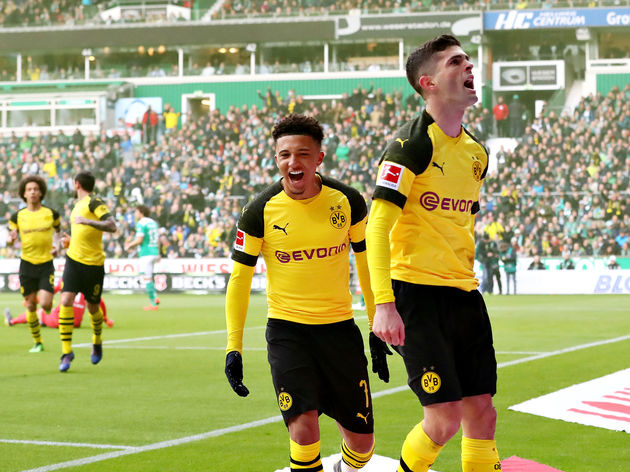 Chelsea bound Christian Pulisic impressed in Reus' absence with a stunning solo effort to give Dortmund the lead last weekend at Bremen, the 20-year-old American will be eager to sign off at BVB in style.

Favre may re-call the experienced Lukasz Piszczek at right-back ahead of Abdou Diallo.

Fortuna Düsseldorf boss Friedhelm Funkel will be hoping that Benito Raman and Dodi Lukebakio, who both have ten Bundesliga goals each, can fire the visitors to a famous upset.

Fortuna Düsseldorf became the first team to beat Borussia Dortmund in the Bundesliga this season as they battled to a superb 2-1 victory at the Merkur Spiel-Arena in December.

Home is where the Reus is 💛 pic.twitter.com/egU0N9qsjk

In the 2012/13 season, the last time Düsseldorf were in the German top tier, Dortmund managed to secure a 2-1 win away at Fortuna but the spoils were shared in a 1-1 draw at the Signal Iduna Park.

In December 2011, Dortmund overcame the then 2. Bundesliga side 5-4 on penalties in the German DFB Pokal round of 16.

Dortmund would be forgiven for coming into the clash with a sense of what could have been after dropping points in their last two outings. There were signs that they had recovered after the 5-0 drubbing to Bayern, with victories against Mainz and Freiburg seemingly getting them back on track. But after the capitulation against Schalke and surrendering a two-goal lead against Bremen, a league which looked Dortmund's for the taking, could fall through their grasp.

Fortuna Düsseldorf have impressed throughout their top flight return this season and are unbeaten in their last two games after suffering defeats to Bayern and Mainz.

With a final game in front of their home crowd against relegated-threatened Hannover, Funkel will no doubt let his players play with freedom in the remaining games.

BVB are a wounded animal and will be eager to get back on track after the frustrations of the previous two games.

With his goal Saturday, Paco Alcácer now owns the Bundesliga record for the best goals-per-minute ratio, scoring every 59 minutes in league play 🔥💥 pic.twitter.com/MbvVFTJkB0

Fortuna on the other hand will see this game as a free hit which could play into Dortmund's hands, if the visitors come with the intention to attack it could allow the likes of Jadon Sancho, Pulisic, Mario Gotze and Paco Alcacer to be at their devastating best on the counter attack.

After inflicting the first league defeat on Dortmund in December, Fortuna will be aware of a backlash, this has the potential to be a high-scoring game.