Arsenal's chances of finishing in the top four are all but over after they slipped to a 1-1 draw against Tottenham on Sunday.

The game passed by with little to shout about for either side but, 15 minutes into the second-half, Brighton were awarded a penalty of their own when Granit Xhaka clipped Solly March in the box. Glenn Murray did the business from the spot, setting up a tense final half hour for Arsenal.

Both Aubameyang and Pascal Gross had excellent opportunities to win the game during the closing exchanges, but both ending up missing the target, meaning that the points were shared.

Despite losing three Premier League games on the bounce, ​Arsenal still had a chance of finishing in the top four so long as they won their remaining games - starting with this one. Simply put, Arsenal weren't at the races in this one and a point was the most they deserved at the end of the day. They looked shaky at the back, failed to exert enough influence on proceedings in the middle of the park and played into Brighton's hands with some uninspired forward play.

Any hopes of finishing in the top four are pretty much extinguished as, even if Tottenham end up losing on the final day of the season, there is currently an eight goal difference between the two sides. If Arsenal are to compete in the Champions League next season, they'll have to win the Europa League.

He may not have got on the score sheet, but the performance of ​Alexandre Lacazette was one of the few positives for Arsenal supporters to cling to.

Arsenal's player of the season was the biggest attacking threat in the second half and his energy in the final third did help to raise the tempo. It was by no means a memorable performance, but it was enough to make him stand out.

Lacazette is twice the player Aubameyang is. #ARSBHA

Lacazette is everything we've needed for years. Type of player who shows urgency to try and pull the game by scruff.

This is why Lacazette is the player of the season. There'll never be a lack of effort from him. #ARSBRI

After Cardiff fell to defeat against Crystal Palace on Saturday, ​Brighton's Premier League status was assured for at least another season. 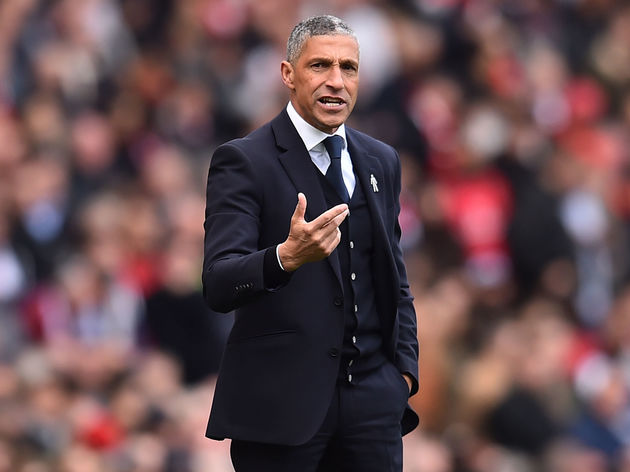 While they may have nothing but pride to play for until the end of the season, Chris Hughton would have made sure that his players were up for this one. It certainly showed, as the Seagulls looked well-drilled, organised and committed. If they were more clinical in the final third then they could have even come away with more than one point.

This game exemplified the fact that nothing much needs to change at Brighton this summer - they just need to find a cutting edge up top.

Lewis Dunk has been a model of consistency since he made his Premier League debut with Brighton at the start of last season and he demonstrated exactly why he is so highly rated in this one.

Dunk threw himself in front of everything, won almost every aerial duel he contested and made a number of timely interceptions to break up any dangerous looking Arsenal attacks.

Lewis Dunk is an excellent CB. Been a rock at the back for BHA this season.

Arsenal will now have to switch their attentions to the second leg of their Europa League semi-final against Valencia, while Brighton will be preparing for a home clash against Manchester City on the final day of the season next Sunday.