​Cardiff manager Neil Warnock has said that he could not be ‘any prouder’ of his side, after they lost 3-2 to Crystal Palace on Saturday afternoon.

The Bluebirds lost to goals from Wilfried Zaha, Michy Batshuayi and Andros Townsend, as the defeat sealed their relegation to the Championship for next season.

Today’s result confirms that #CardiffCity will finish 18th in the @premierleague table and play in the @SkyBetChamp in 2019/20.#CityAsOne pic.twitter.com/29fxkKxGlN

Speaking after the game, Warnock reflected on his side’s defeat. As quoted on the club’s official website, he said: “Everybody’s disappointed to suffer a relegation, I can’t really be any prouder because the lads put so much effort in.

“But we created so many chances, second-half and that’s the story of the Premier League - you’ve got to take opportunities like that.”

After going behind early on, ​Cardiff equalised minutes later through Kelly’s own goal. However ​Crystal Palace retook the lead soon after, before scoring their third goal in the second half to secure the win and seal Cardiff’s fate. 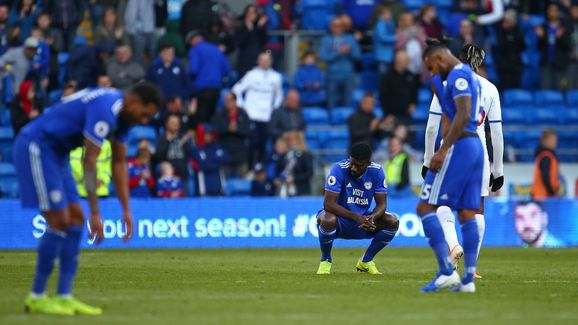 Despite earning a record-breaking eighth promotion as a manager with the Bluebirds, Warnock was unable to keep them up. It sees Cardiff return to the ​Championship just one season after their promotion, where they finish second behind ​Wolves.

He added: “We’ve had so many things to overcome this season and I’ve never seen a group of lads keep together like that - it’s just been one thing after the other. I’m quite proud of what we’ve achieved, but we’ve got relegated, so it’s a difficult thing to digest and that’s how I feel.”

Now that Cardiff’s relegation from the ​Premier League is confirmed, they must now focus on rebuilding and aiming to return next season. Whether Warnock will still be in charge for the upcoming campaign is unknown, though he seems likely to stay in charge. Warnock added: “I’m so proud that the fans have been like they have because I’ve never experienced supporters like that in my career and this season’s probably been my best in management.

Cardiff will conclude their Premier League campaign on the final day next Sunday, as they make the trip to Old Trafford to face ​Manchester United.