​Liverpool overcame a stubborn Newcastle United side to return to the summit of the Premier League table with a hard-fought 3-2 win at St. James' Park.

Both sides were on the scoresheet after 20 minutes, as Christian Atsu's simple finish, after Salomon Rondon saw his initial shot blocked by the arm of Trent Alexander-Arnold cancelled out Vigil van Dijk's headed opener 13 minutes into the contest.

Liverpool however retook the lead - that they saw through to half-time - on 28 minutes thanks to a deft finish from Mohamed Salah, just two minutes after Ayoze Perez had struck the bar for Newcastle from a tight angle.

Newcastle found themselves back on level terms nine minutes after the restart through a well-taken finish from Rondon, as Liverpool toiled in their pursuit of a third goal. Their task was made more difficult when Salah had to exit the game due to a head injury following a collision with Martin Dubravka, but his replacement Divock Origi stepped up with a vital contribution, as his challenge on Jamaal Lascelles saw the ball glance beyond Dubravka in the 86th minute for a crucial winner. Despite Rafael Benitez managing Liverpool earlier in his career, the Spaniard did his former club no favours with how they approached the game.

The Magpies were very physical over the course of the game in their attempts to disrupt any sort of rhythm the visitors tried to muster, which in turn brought the fans into the game, who created a hostile atmosphere for the title-chasers.

They also showed fight to come from behind twice, and on another day could've played the majority of the game against ten men had Alexander-Arnold been sent-off for handball. Otherwise, it was a solid performance from a Newcastle side that almost earned them a point. 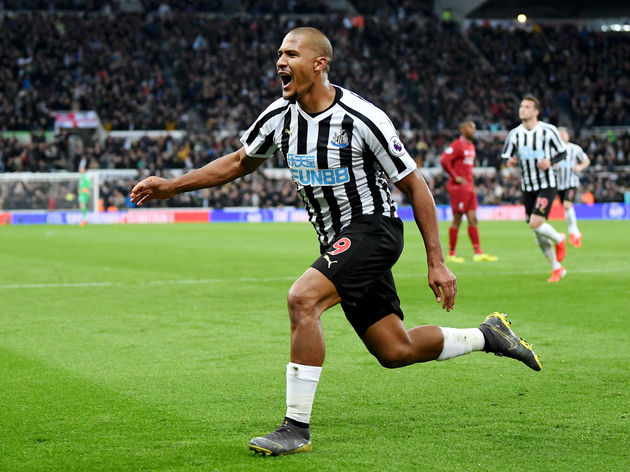 Salomon Rondon occupied Liverpool's back four brilliantly over the course of the game, Dejan Lovren especially, with his physical presence giving Newcastle a focal point to play off.

He was unlucky the arm of Alexander-Arnold denied him a goal in the first-half, but scored a goal his played deserved in some fashion, with a well-taken volley past a helpless Alisson.

Rondon’s having the game of his life. Great finish. Deserves that. Cracking game. #NEWLIV

Rondon has been quality tonight. Be absolutely gutted when he goes back to West Brom. If we had any sense we would sign him permanently but unfortunately he doesn’t fit the NUFC “profile” #NUFC

Rondon is quality man!!! What a strike It wasn't great and it wasn't pretty from Liverpool, but it very rarely is during a title run-in, especially one of this magnitude as Jurgen Klopp's substitutions had the desired effect once again.

Xherdan Shaqiri's free-kick was challenged by Origi, which went in off the forehead of Jamaal Lascelles, to provide the Reds with yet another late winner, although it was far from convincing.

You can't ever doubt the integrity of the Premier League. Newcastle, with little to achieve in the table, fight and battle to the bitter end. Somehow, Liverpool win again. To do that after what happened in Barcelona, is absolutely remarkable.

What a season! What a team! Truly a title chase for the ages! The resilience, the quality, the depth and the attitude of this #Liverpool team is just amazing! Hope #Salah is alright! Over to you #BrendanRodgers! #LFC #YNWA #JurgenKlopp!

Real grit shown by Liverpool though - this was a tough task after the Barca defeat & they showed a different side to them to get the win. Incredible to have two terrific teams going toe to toe for the title.

Barring the two first-half goals, Liverpool weren't their assured selves at the back, with Rondon in particular causing them problems, and making the game a challenge, but one that Klopp's side managed to come through.

The performance would be a concern with Barcelona looming, but in terms of the title race, those connected with Liverpool won't care how they got the win, just that they did. While his presence in the game was controversial, Trent Alexander-Arnold showcased his quality in the final third with two assists in the first-half.

His first provided a simple header for Van Dijk from a corner, while his second was a peach of a cross for Salah, taking his tally of league assists to 11 - level with Andrew Robertson - to give another example of the importance Liverpool's full-backs for their title tilt.

2 - Liverpool are the first team in Premier League history to have at least two defenders provide 10+ assists each in a single campaign (Trent Alexander-Arnold 11 & Andy Robertson 11). Outlets. #NEWLIV pic.twitter.com/2NaayZJAen

Trent Alexander-Arnold is having an unbelievable season. Top quality crosses into the box and he's only 20-years-old. Incredible! #NEWLIV

The quality of Trent Alexander-Arnold’s crossing is absolutely sensational. The best the PL has seen since David Beckham? #NEWLIV #LFC

Newcastle end their season with an away trip to the capital, as they face an already-relegated Fulham side​ at Craven Cottage.

Liverpool meanwhile have the second-leg of their Champions League semi-final against Barcelona on Tuesday, as they look to overturn a three-goal deficit at Anfield. They then host Wolves on the final day, which could see them crowned as Premier League champions.