Borussia Dortmund have thrown away their chances of catching Bayern Munich at the top of the Bundesliga table, giving up a two-goal lead on the road to Werder Bremen to leave the Weser Stadion with just one point.

Christian Pulisic, starting just his second league match of the year, opened the scoring for the visitors after just six minutes in the Topspiel, running straight through the heart of Werder Bremen's defence before calmly finishing past 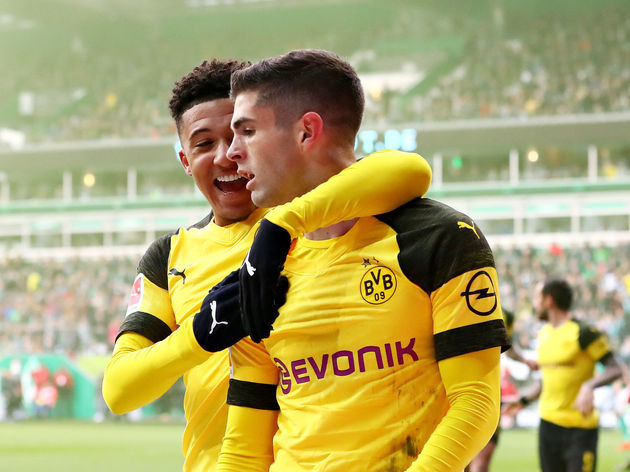 Paco Alcácer stepped up for the free kick and just like he did against Augsburg earlier this season, the Spain international hit the ball over the wall and past

Hitting the self destruct button is hardly anything new for Borussia Dortmund, but even by their high standards, Saturday's draw against Werder Bremen was on another level completely.

They started the game brilliantly and had taken control of the game by the scruff of the neck, something which Bayern Munich failed to do in their two recent meetings with Bremen.

But within the blink of an eye, Borussia Dortmund found themselves on the back foot and that's where they stayed for the remainder of the match, giving away two cheap goals to hand Bayern Munich the league title on a silver platter. It was only the USMNT international's second start in the Bundesliga in 2019, but Pulisic wasted no time in marking his authority on the match with a flurry of runs which carved Werder Bremen open.

He opened the scoring with a clinical finish from the first shot of the match, and it was Pulisic's driving run which lead to the free-kick which

I have been critical of Pulisic this season. But today he is having a great game. Definitely, has come in an done well replacing Reus. #BVB #SVWBVB

One of the best games I've seen Christian Pulisic play in some time.

Pulisic is on fire today #USMNT

All that good work Pulisic has been undone by a GK howler and terrible ball-watching by the captain.

Pulisic's individual performance wasn't enough to stop Borussia Dortmund from hitting their much-beloved self destruct button, but it was a promising performance from the young forward ahead of his summer move to Chelsea.