​Arsenal striker Alexandre Lacazette has emerged as a potential transfer target for Barcelona this summer, while Atletico Madrid's Antoine Griezmann remains on the Catalan side's shortlist.

It's no secret that Barça are searching for a new striker, with the club currently without any quality cover for Luis Suarez, who at 32, is only likely to have a few seasons left at the highest level. 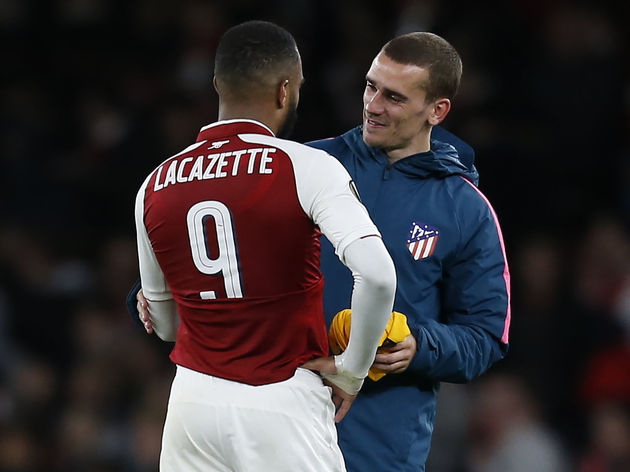 Griezmann almost joined ​Barcelona last summer, before infamously rejecting their advances in a video titled 'The Decision'. But while the Frenchman remains a target for the reigning ​La Liga

champions, ​Mundo Deportivo report that compatriot ​Lacazette is now also being monitored, with the striker valued at between €65m-€70m.

The 27-year-old has been in impressive form for the Gunners this season, with his brace in the 3-1 win over Valencia in the club's Europa League semi-final first-leg taking his tally in all competitions to 18 in all competitions.

Lacazette also boasts an impressive nine assists this season, while his movement and willingness to drop into deeper positions seemingly appealing to Barcelona, as they look to strengthen in the final third.

According to the aforementioned report, La Blaugrana could attempt to sweeten the deal by offering one of centre-back Samuel Umtiti or central midfielder Andre Gomes, which are positions the Premier League side are keen to strengthen in themselves.

Unai Emery and ​Arsenal will of course be desperate to keep hold of Lacazette, who has forged a strong partnership with Pierre-Emerick Aubameyang for the north London club, yet the advances of Barcelona could be too good to refuse.