​Jurgen Klopp has confirmed that midfielder Naby Keita will miss the remainder of the season, as he faces two months on the sidelines with a 'high grade abductor injury'.

The 24-year-old was forced off midway through the first half in the 3-0 defeat to Barcelona, being replaced by Jordan Henderson, but there was no word on his condition immediately after the match. 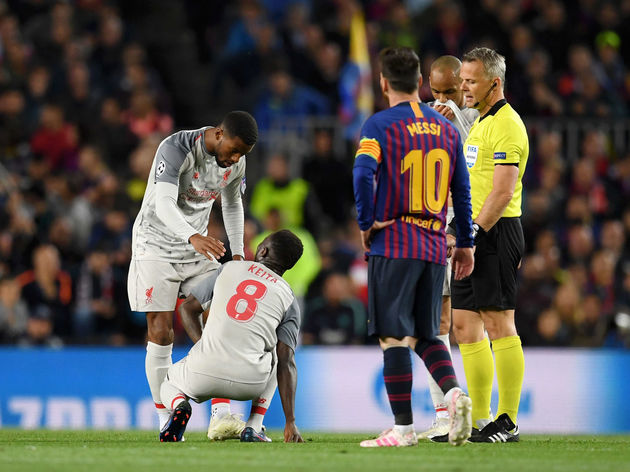 The news means he will miss the Africa Cup of Nations, which will be disappointing for the Guinean considering he was playing his best football of the season prior to the injury.

"It's a high grade adductor injury with tendon rupture," Klopp said in his pre-match press conference, as relayed on Twitter by ​the Mirror's David Maddock. "Keeps him out for two months I would say.

"It is serious and of course it is not a good moment, you have to help the players in this moment everything you can."

Klopp confirms bad news on Naby Keita: "It's a high grade adductor injury with tendon rupture, keeps him out for two months I would say." #LFC

It comes as a particular blow to ​Liverpool considering how important Keita was becoming to the side. Having initially struggled to make an impact upon his arrival in the summer, recent weeks had seen his involvement increased, and he scored his first goals for the club in wins over Southampton and Huddersfield.

Where one door closes, another door opens, however. Alex Oxlade-Chamberlain made his long-awaited return from injury as a substitute against Huddersfield, and could step into the shoes Keita leaves vacant for the remainder of the campaign.

Klopp asked if Keita's injury provides a chance for Oxlade-Chamberlain: "Perfect that he's back. He will for sure be in the squad then we have to make a decision who starts. We will use him, of course."

"It's perfect that he's back," Klopp said, via David Lynch of the Evening Standard. "He will for sure be in the squad then we have to make a decision who starts. We will use him, of course."

The final bit of notable injury news came when Klopp was asked about the fitness of forward Roberto Firmino. He hasn't started since the win over Cardiff two weeks ago, since appearing twice as a substitute, but the manager refused to be drawn into commitment over his condition, saying simply that they 'will see' if he plays.

Klopp on Firmino fitness and whether he will start at Newcastle: "We will see." #LFC

The ​Newcastle clash is crucial for Jurgen Klopp and his side, as they look to heap one last bit of pressure on Manchester City to force a stumble that could win them the Premier League title.

Liverpool ​travel to Tyneside to face Rafa Benitez's side on Saturday, while ​Manchester City host Leicester on Sunday, before the two sides play out their respective last games of the season in tandem next weekend.