​Various reports have surfaced regarding the extent of the injury sustained to Naby Keita during Wednesday's defeat to Barcelona, with the Guinean likely to miss the remainder of the season.

Keita hobbled off the pitch just 22 minutes into the match with the score at 0-0, where he was replaced by skipper Jordan Henderson. The Reds would go on to suffer a 3-0 defeat at Camp Nou, after Lionel Messi netted twice. 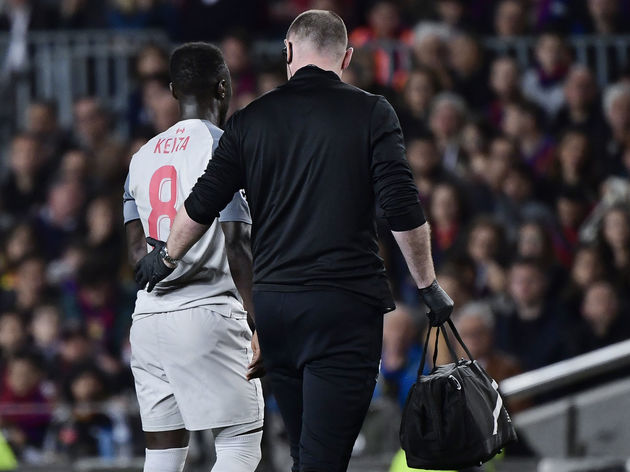 Now it has emerged from multiple sources that the ​Liverpool number eight has suffered a small adductor tear in his groin and is set for a month on the sidelines. The assessment will rule him out of the club's remaining two ​Premier League fixtures, as well the return leg against ​Barcelona next week.

David Maddock of the Mirror ​tweeted the update, along with other sources, which will come as a huge blow to Jurgen Klopp at such a crucial stage of the season.

Liverpool still assessing Keita, but injury doesn’t look good. Small adductor tear, a muscle in the groin, will likely be out for a month. So #LFC season over.

Keita has found form at the right time with just a handful of matches left this season, with the 24-year-old scoring his first league goals of the campaign in recent wins over Southampton and Huddersfield, cementing his place in the starting XI in the process.

With the club facing a mountain to climb to overturn the first leg defeat at the Camp Nou, they similarly are likely to need maximum points in their final league games if they are to claw back the one point they sit adrift of leaders ​Manchester City.

Halfway through the tie.