​Liverpool defender Virgil van Dijk has admitted he is truly honoured to have won the PFA Player of the Year award on Sunday.

Players in the Premier League voted for Van Dijk ahead of the likes of Raheem Sterling and Sadio Mane, and he now becomes the second Liverpool player to win the award in the last two seasons, after Mohamed Salah's personal triumph last year.

Congratulations, VVD! 🙌 @VirgilvDijk has been named as the @PFA Players’ Player of the Year. 👏 #PFAawards pic.twitter.com/asSm60VFJS

Speaking to ​Liverpool's ​official website, Van Dijk confessed he is delighted to have been handed the award by his peers.

He said: "It’s pretty difficult to put it into words. I think it’s the highest honour you can get as a player – to be voted Player of the Year by the players you play against every week. It’s special. I’m obviously very proud and honoured to win it.

0 - No opposition player has completed a dribble past Virgil van Dijk in any of his 36 PL apps this season. In fact, this run stretches back to last March, meaning he hasn’t been dribbled past by an opponent in any of his last 45 PL apps. Immovable. #PFAAwards #POTY pic.twitter.com/Y8BIsle0vq

"Throughout the whole season I’ve been feeling great – we’ve been winning many games, we are competing with ​Man City for the title and obviously the most important thing is to stay fit and play consistently as well. I think I’ve been doing that pretty well this season.

"Obviously without the help of my teammates it wouldn’t be possible. We just have to keep going and carry on. I’m feeling good."

Manager Jurgen Klopp sent Van Dijk a ​short video message after he won the award, in which he revealed his delight at the Dutchman's recent development. 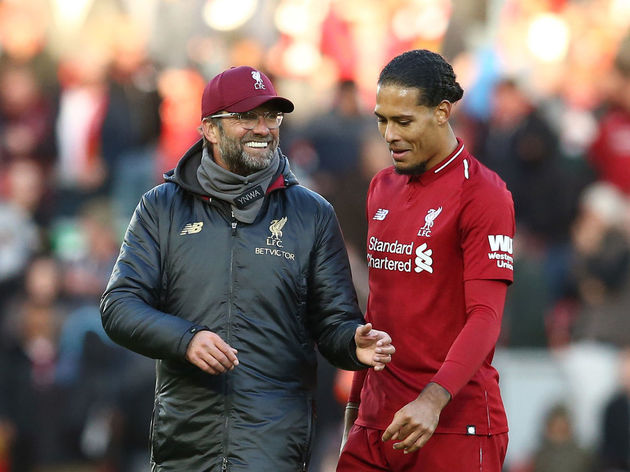 He added: “I’m really proud it’s the second time in a row I can speak about a wonderful player who won the award for Player of the Season: Virgil van Dijk. Who would have thought that when he started back in Holland? I think not everybody saw immediately what kind of player hides in this giant body.

"But now the whole world is aware of that and I’m really happy I can be a little bit around that development. I would love to think it’s because of me! But obviously it’s not, he was already the player he is now when we bought him from ​Southampton.

“It all worked out. From the first moment I was so excited about the opportunity to work together and now you are the man – at least for this season!”