Wolves took a huge step in their bid to finish seventh as they beat Watford 2-1 on Saturday afternoon.

Wolves thought they had taken the lead through Raul Jimenez after an uneventful opening half hour, but Etienne Capoue's excellent clearance off the line ensured it remained goalless.

The visitors did eventually take the lead, as Jimenez got his goal with four minutes of the first half remaining. Diogo Jota wonderfully curled the ball into the box and the Mexican headed home his strike partner's cross from close range to put the visitors in front.

Watford drew level soon after the restart, as Andre Gray pounced on a poor defensive mistake. Ryan Bennett's awful pass fell short of Rui Patricio and although the goalie saved Gerard Deulofeu's initial effort, Gray followed up to sweep the ball into the net to draw the hosts level.

Wolves scored the winner in the 77th minute, as Jota tucked home Ruben Neves' looping cross. Ben Foster was caught off his line as he came for the ball, but he couldn't get there in time as the Wanderers secured a huge three points. 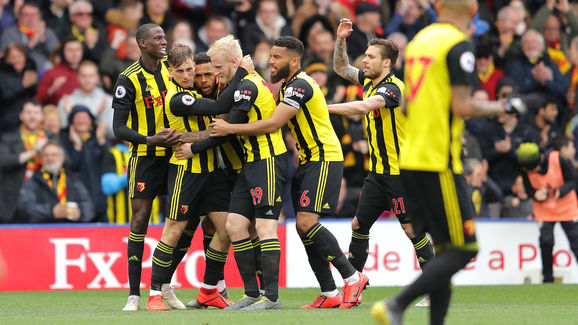 ​Watford will be disappointed with the result, as they missed a chance to move two points clear of Wolves into seventh. The Hornets were generally lacklustre throughout the game, and apart from the half hour following their equaliser, they were far from their best in a mediocre display.

The defeat means Watford have just one win in their last four league games, as they fell to another disappointing defeat. Nevertheless, their dreams of European football are still alive, and if they can get back to their best for their final two games then they can certainly finish seventh.

STAR MAN - Thought Watford weren't at their best, Andre Gray played well up front. Without regular strike partner Troy Deeney, the Englishman did well to create chances for the Hornets as well as scoring their only goal of the afternoon with an emphatic finish. ​​Wolves earned a valuable victory at Vicarage Road, as they avenged their FA Cup semi final defeat from the start of the month. Though the Wanderers weren't at their best, they got the job done and took their chances as they moved four points clear into seventh place.

It was a much needed win for Nuno Espirito Santo's side, as they took a vital step closer to a potential European spot. Bennett's defensive error to gift Watford a goal ultimately came to nothing, as a strong attacking performance from the visitors secured a massive win.

Diogo Jota has scored in back-to-back Premier League games for the first time in 2019:

STAR MAN - It was a match-winning performance from Diogo Jota, who got a goal and an assist on Saturday afternoon. He was excellent all game long, combining well with Jimenez and working hard up front to help his side to a big win at Vicarage Road. With the ​Premier League season reaching its conclusion, both sides have two games to play in their bid to finish seventh. Watford travel to Stamford Bridge next Sunday, as they face ​Chelsea. The Hornets are at Vicarage Road on the final day, as they host ​West Ham on 12 May.

Wolves have their final home game of the season next Saturday, as they welcome already relegated ​Fulham to Molineux. They finish off the season with what could be a decisive game in the title race, travelling to Anfield to play ​Liverpool on 12 May.