​It would be fair to say that prior to his first goal for Liverpool against Southampton earlier in April, Naby Keita had failed to justify his £52.75m price tag during his first season at Anfield.

Inconsistent was the best way to describe the 24-year-old, who wasn't able to produce showings as he did against West Ham United and Bournemouth on a regular basis that his sizeable transfer fee demands. 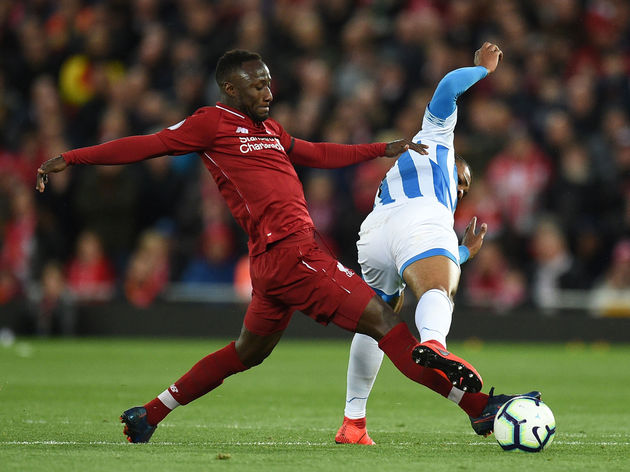 The run-in for the Reds however has proven to be the making of ​Keita, whose form has notably improved since scoring his first goal in a ​Liverpool shirt, and has become an integral part of a side chasing history.

It was history that the former RB Leipzig midfielder was making during ​the 5-0 thrashing of Huddersfield Town last time out, as he scored the club's fastest ever ​Premier League goal after just 15 seconds, with it all his own making.

A pass into the Terriers' holding midfielder Jon Stankovic gave Keita the chance to exhibit why exactly he was bought in the first place. The Guinea international pressed the moment Jonas Lossl made the pass into midfield, dispossessed the Slovenian, before producing a measured finish beyond the goalkeeper.

15 - After just 15 seconds, Naby Keita's goal for Liverpool is the quickest they have ever scored in a Premier League match. Lightning. #LIVHUD pic.twitter.com/ADQcCylQMu

It was a snippet of what he had been doing in the ​Bundesliga for the past two seasons at RB Leipzig, and what he's been doing in recent weeks at Anfield.

His first Liverpool goal in the 3-1 win over Southampton was an important one in respect to the title race. A late arrival to the penalty area, his header

Keita's goal touch was with him again the next game against FC Porto. While the execution was somewhat fortuitous - as his strike took a wicked deflection to allude Iker Casillas - it came as a result of him being involved in the final third and providing that link between midfield and attack that Liverpool have been accused of not having.

No player on the pitch won more tackles (6) or completed more take-ons (2) than Naby Keita in the first half vs. Porto

He won twice as many tackles as any other player.  pic.twitter.com/yyxAgaDQ0C

While the scoring of goals provides an obvious metric for his improvements in recent weeks, it's his general play that has also seen an upturn. Keita offers a composed presence in the middle of the pitch, with his physique allowing him to almost glide across the pitch, and carry the ball into advanced areas with his obvious dribbling ability.

Arguably the facet of his game better than his dribbling is his ability to win back possession. It was no secret as he'd done the same in Germany, with his approach tailor-made to a Jurgen Klopp side - a high-energy approach and a relentlessness to win the ball back when pressing.

Yes, the goals alluded him in the games that followed against Chelsea and Cardiff, but the level of performance he set in previous games did not, as Liverpool maintained their push for a first league title in 29 years. Keita isn't the first player to experience a slow start to their Anfield career under Klopp. Andy Robertson too had to bide his time last season. He's since seized the opportunity to become the first-choice left back at the club, resulting in his selection for the PFA Team of the Year this season.

Another summer signing this season in the shape of ​Fabinho also had to be patient for his chance in midfield, and like Robertson, has since become an key player in front of the back four, which gave Keita hope that time would be afforded to him to be a success at the club.

There are undoubtedly areas of Keita to improve on, most notably the number of assists he provides. After providing 12 Bundesliga assists in two seasons at RB Leipzig between 2016-2018, the midfielder has just one Premier League assist to his name so far. Liverpool's setup however does rely a lot on their full-backs providing a creative edge to their player, as Trent Alexander-Arnold's nine league assists and Robertson's 11 highlights. It's certainly taken pressure off the midfield to create, but it's a stat that Keita will be looking to improve on.

For now though, Keita is proving to be a vital player in a run-in that could yet culminate in the club winning both the Premier League and Champions League, with his manager waxing lyrical over the latest example of what's to come from him at Anfield.

"People expect you to pay money for a player and from the first day he is able to show everything he can do,” said Klopp of Keita after the 5-0 Huddersfield win, as quoted by the ​Liverpool Echo.

"That would be nice if it was that easy, but he needed time, we gave him time and now he is there. It was for sure his best game tonight, in a lot of departments.

The all-round midfielder appears to have found form at just the time for both himself and the club at such a crucial stage of the season. A place in Liverpool's starting lineup is Ketia's for the time being, and if the season ends with the lifting one or even two trophies, few will remember his slow start to life at Liverpool.