Championship Team of the Season 2018: What Happened Next?

​The 2019 Championship Team of the Season was released earlier this week, with the lineup unsurprisingly dominated by Leeds United and Norwich City players.

There was a bit more variety in the side last year, however, with six different clubs represented for 2017/18. Inclusion adds to a player's profile, marketing them to teams competing at the top level. While some of last year's selection were promoted to the Premier League, others made the step up to the top-flight via the transfer route.

Fortunes have been decidedly mixed for the players who were chosen in the 12 months since the announcement, with some excelling, others stagnating, and one not having made an appearance since May.

Here's how the 2018 Championship Team of the Season have fared in the following year. What was Ruddy's reward for his superb showing during ​Wolverhampton Wanderers' charge to the second division title? A spot on the bench.

Portugal international and Euro 2016 winner Rui Patricio was brought in over the summer, his performances seeing Ruddy make just a single ​Premier League appearance all year. He was given the gloves for the FA Cup campaign, though that ended in tears as ​Watford stunned Wolves with an inspired semi-final comeback. It has been a rather unsatisfactory season for Fredericks. He has struggled for game time after leaving ​Fulham for ​West Ham United when his contract expired, finding himself behind Pablo Zabaleta and Fabian Balbuena in the pecking order.

His forgettable debut year with the Hammers was summed up by an ill-advised challenge on ​Manchester United's Anthony Martial in early April. The 26-year-old scythed his opponent down to hand Paul Pogba the chance to snatch an undeserved victory from the spot. It was far from a fitting end to a stellar career for Terry. The former England skipper was unable to help ​Aston Villa win the playoff final i At last, a player who has enjoyed a positive season on the pitch! Captain Coady has led his recruits in a stupendous campaign, Wolves reaching the FA Cup semis and pushing for a spot in next year's Europa League.

There have been calls for former ​Liverpool man to be brought into Gareth Southgate's England set-up, such has been his level of performance. Coady has been ever-reliable in the heart of defence. Despite interest from a host of top clubs, both at home and abroad, Sessegnon elected to stay with Fulham in their first year back in the Premier League. Unfortunately, they have had a torrid time, with the 18-year-old finding himself unloved during Claudio Ranieri's brief spell in charge over the winter.

Slavisa Jokanovic - the man who guided the Cottagers back to the promised land - regularly selected Sessegnon in the early months of 2018/19, before his sacking saw the incoming Ranieri cast the youngster aside. The Italian is gone now and new man Scott Parker has once again handed Sessegnon a starting berth.

His first foray into top flight football may not have gone as planned for the 18-year-old, but a big move still awaits this summer. Neves' star continues to rise at Wolves. He was not included in this season's PFA Team of the Year, an outcome that perplexed many who have watched him all campaign. Possessing unerring accuracy from the dead-ball and a delightful array of passing, he is fast becoming one of the league's top players.

He whipped a peach of a free-kick past ​Arsenal goalkeeper Bernd Leno in midweek, adding to his fine collection of mesmeric long-range strikes. Like teammate Sessgnon, the Scotsman has been unsettled by the constant flux of managers at Craven Cottage. When Ranieri elected to play him in an unfamiliar wide position, Cairney looked uncomfortable, failing to make an impact on games.

He has reverted back to a central role under Parker and is once again proving his class, creating opportunities for others in white and dictating proceedings. 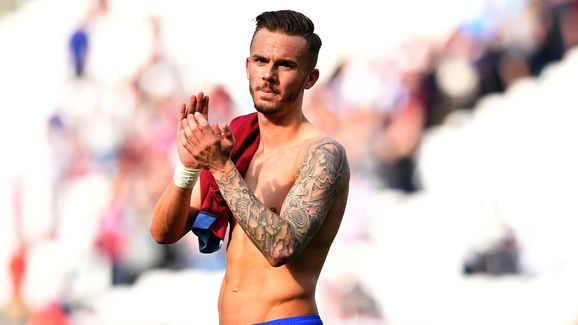 It would be an understatement to say Maddison's £25m summer switch to ​Leicester City has turned out rather well. He has been proving his doubters wrong all year, the 22-year-old's electric form launching him into the national squad last autumn.

Like midfield counterpart Neves, he is an expert free-kick taker, punishing a number of sides for giving away fouls in dangerous positions.

The Leicester star also received his first senior England call up last autumn and could well be a staple of squads in years to come. ​Cardiff City forked out £10m to acquire Reid from Bristol City in June, the winger going on to make 24 Premier League appearances for the Bluebirds thus far.

In that time he has amassed six goals and assists, a commendable tally given the Welsh club's relegation battles this term. They have relied heavily upon defensive solidity, making Reid's total yet more impressive. The Ghana international has remained with Villa despite their failure to secure promotion last time around. Regrettably, he has not hit the giddy heights of last term, netting just three times in 2018/19.

It's not been a terrible season for Adomah, who could yet earn promotion with Villa, it's just that the previous one was so wonderful. It seems that the ​Championship is the perfect level for Vydra. At least, that is what the 2018/19 campaign has indicated. Now at ​Burnley, he has struck just once in 11 league appearances, finding himself behind Ashley Barnes, Chris Wood and veteran loanee Peter Crouch in the pecking order at Turf Moor.

The Czech s has had similarly tough times in the top division before while at West Brom, suggesting he would have been better off staying with ​Derby County, for whom he collected 22 goals last season.