Tottenham forward Heung-min Son has said he is sad to have to watch the first leg of his side's first ever Champions League semi-final from the sidelines, but says he trusts the Spurs squad to get the job done without him.

The South Korean starred as Tottenham overcame Manchester City on away goals, scoring three of his side's four goals over the two legs, but unfortunately picked up a booking for a foul on Kevin De Bruyne in the 4-3 defeat at the Etihad in the return encounter.

Heung-min Son's second goal as seen by the Tottenham away supporters...

As it was his third of the competition, it carries a one match ban, meaning he will be forced to watch the first leg of the semis from the stands at ​Spurs' new stadium.

“I want to play every single game. I enjoy my football and, of course, I want to play the semi-final. It’s the first for this team and myself. 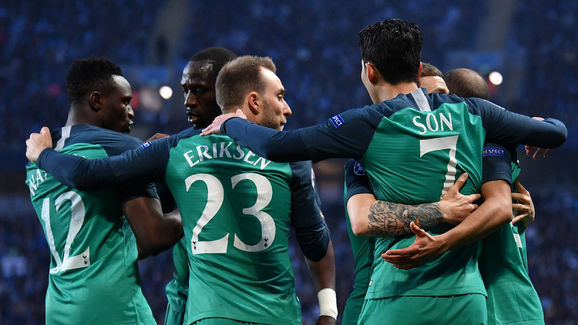 "As I said, I’m very sad but I am looking forward to watching this unbelievable game in our stadium. I hope I’m going to enjoy it.”

While Spurs overturned ​Premier League champions ​Manchester City to reach the semi-finals, Ajax caused arguably a bigger shock as they twice came from behind to eliminate Italian giants ​Juventus, and create a semi-final tie that no-one expected.

Regardless of the fact Spurs have avoided Cristiano Ronaldo and co, however, many still suggest that they are second favourites to reach the final in Madrid, with the Eredivisie leaders being touted as the side most likely to win.

Ajax midfielder Donny van de Beek disputes that assertion, however, arguing that Spurs are a one of the Premier League's top sides. "I don't agree with that," he told ​Ajax1, when asked if his side were favourites heading into the tie.

"That does not mean that we cannot beat them. We will have to reach a high level to beat Tottenham.