Gennaro Gattuso’s AC Milan travel to the Stadio Olimpico Grande on Sunday night for what will be an intense battle for Champions League qualification, as fourth placed Milan take on seventh placed Torino.

The Rossoneri are coming off the back of a dismal 1-0 loss at home to Lazio which knocked them out of the Coppa Italia; whilst their league performance has also lacked its usual flair, losing two of their last three games.

On the flip side, Torino are unbeaten in five league games and are slowly cruising towards European qualification. A win for Torino in this game could put them into fourth if other results go their way, whilst a win for Milan would help solidify their return to the Champions League.

Gattuso on #MilanLazio: "We've suffered a heavy blow. Now, we must regain our energy and bring the fight to Torino" ️

Following a rough night, Coach Gattuso urges his boys to pick themselves up starting from Sunday's league clash in Turin: https://t.co/fe19TSDLjR#TIMCup pic.twitter.com/YU6GUNLllr

​​With only five games remaining in the season, both teams will be looking for every point they can possibly get in order to keep their European dreams alive.

​AC Milan’s lineup is nearly at full strength, with their only absentee being box-to-box midfield maestro Giacomo Bonaventura, who’s been out since November after knee surgery. However, due to a recent slump in form, Gattuso may be looking to bring in some fresh legs, with Mattia Caldara edging near a recall.

This is an incredibly pivotal point in Milan's season, and any points dropped at this late stage could condemn them to another year without ​Champions League qualification, which could prove costly. Even though Torino are in better form than Milan, their squad is severely lacking at the moment. Simone Zaza and Daniele Baselli are both serving suspensions, while they will also be without Koffi Djidji and possibly De Silvestri, who have both been out of action for two matches now.

This game may see the return of Iago Falque though, who has been out since late March with a twisted knee – missing six matches in that time.

Milan have played Torino a total of 34 times through the history of their clubs, with the most compelling scoreline coming in April 1995. Milan won that game 5-1 at home, in a stark departure from the previous two fixtures between the sides, which had both ended 0-0.

In fact, fourteen of the fixtures between Torino and Milan have ended in a draw, although only four of those draws have ended at 0-0. Torino haven’t managed to muster a home win against Milan since 2001, where that game in particular ended in a 1-0 victory for them. ​The last four times these two sides have met in the league have resulted in draws, with the most recent one ending in a 0-0 result at the start of December.

While Torino are unbeaten in five, only two of those results have been wins – including a 1-0 win at Genoa last week.

Milan aren't in form themselves though, being knocked out of the Coppa Italia at home and only managing to win one of their last five Serie A games. If their form continues, they will dip out of Champions League qualification into the dreaded depths of the Europa League. 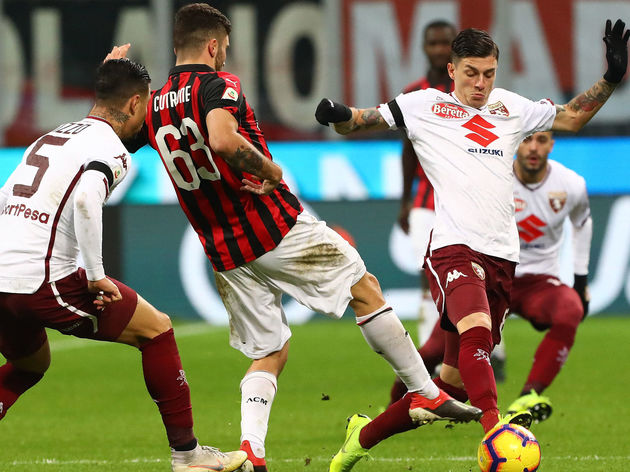 This is how each team fared in their past five matches in all competitions.

After a dire showing from Milan in the Coppa Italia on Wednesday, they’ll be looking to bounce back with a win against strong opposition. However, it may be difficult to break down a compact Torino side who have only conceded three in their past five games.

Meanwhile, Torino will be looking to solidify their Champions League – or at the very least European – qualification, and a win against a sorry Milan side would do so.