Chelsea fans sat back and watched as Manchester United, Arsenal and Tottenham Hotspur all dropped points this weekend. The Blues were handed a huge chance to cement their place in the top four, and they blew it by drawing 2-2 at home to Burnley on Monday.

The stars had all aligned for Chelsea. It seemed as though their rivals had handed them a lifeline, but they failed to perform when required. Again.

It was the performance of a side who does not deserve ​Champions League football next season, and that's the way things are heading.

Yes, ​Burnley sat back and played for a draw, but that should not be a problem for a side who aspire to be one of the finest in Europe. ​Chelsea should have countless ways to hurt teams like Burnley but, as we have seen so often this season, they only have one - ​Eden Hazard.

Sean Dyche's men sat deep and suffocated Hazard, challenging him to beat four or five defenders in order to do anything with the ball. What did Chelsea do? They kept giving him the ball. Hazard may be great, but there's only so much one man can do. There was space for other players to perform, but Chelsea were so one-dimensional that they only knew how to rely on Hazard. Callum Hudson-Odoi's ​ruptured Achilles was certainly rotten luck, but let's not act like Chelsea shouldn't have at least five or six other players who are capable of winning games.

Is it a problem with the quality of the players? Many in this squad have faced criticism from fans who have accused them of simply not being good enough to wear the blue of Chelsea. Academy graduate ​Ruben Loftus-Cheek tried his hardest, and even January flop ​Gonzalo Higuain put in a shift, but their efforts were not enough to support the whole team.

However, the way the team plays goes back to one man - Maurizio Sarri. 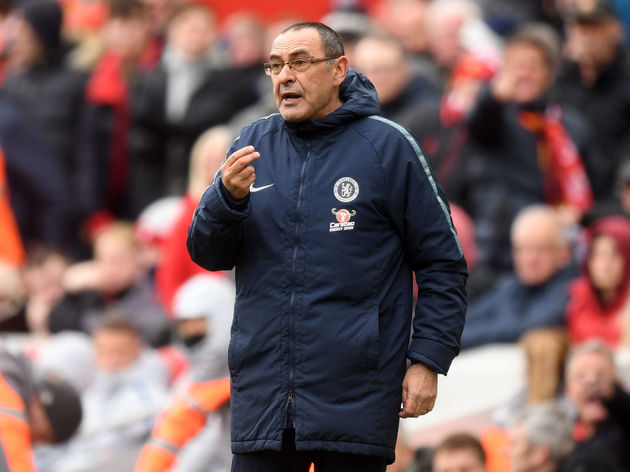 Is this tactic of constantly leaning on Hazard his idea? It almost seems that way, as the Italian has failed to prove his ability to conjure up a 'Plan B' in the face of trouble.

With Chelsea chasing a goal on Monday, Sarri brought on ​Mateo Kovacic, who is without a goal in club football since January 2017. ​Ross Barkley, who has racked up five goals and six assists this season, remained on the bench.

The 4-3-3 formation was not working. When Hazard could not win his battles, Chelsea simply sent hopeless cross after hopeless cross into the Burnley box, giving James Tarkowski and Ben Mee exactly what they wanted. Two strikers may have been the answer, but Sarri decided to withdraw ​Higuain, who was having perhaps his finest game in a Chelsea shirt (which isn't saying much) to bring on ​Olivier Giroud. Trying something new is what this side need, but Sarri is not the man to implement this change.

The squad is not strong enough, the tactics aren't good enough and the manager isn't flexible enough. As it stands, Chelsea would be eaten alive in the Champions League, even more so if Hazard heads to ​Real Madrid. Something needs to change, and soon.