De Bruyne, who has already had two significant spells out of action this season because of knee injuries, was forced off 38 minutes into the weekend fixture, with Guardiola now confirming the player may be limited to just one or two more games before the end of the campaign. 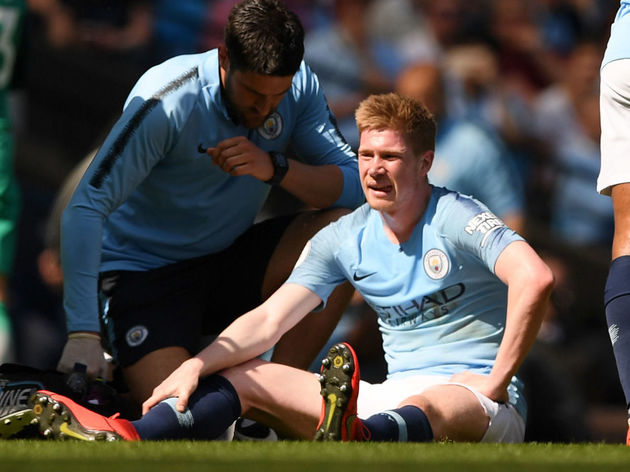 "It's a muscular problem we will see in next [few] days how he will do but, tomorrow, no," the City boss explained ahead of the Manchester derby at Old Trafford.

Given the injury problems the Belgian international has suffered this season, limiting him to 30 games in all competitions and ruling him out of 22, Guardiola appeared to suggest that City will be more careful when managing De Bruyne's fitness next season.

PEP  (on @DeBruyneKev injury) I don’t know. It’s a muscular problem we will see in next days how he will do but tomorrow no.

"We will see if he can play one or two more games and next season take care of him. We are going to speak with him, with the doctors and physios to make sure he is safe and fit. That's what we are trying to do from now on," Guardiola commented.

After facing United on Wednesday night, their game in hand on Premier League leaders Liverpool, City have just three more league fixtures this season, against Burnley, Leicester and Brighton, before then facing Watford at Wembley in the FA Cup final on 18 May.

With Guardiola's estimation, De Bruyne could feature against Brighton and Watford. Aside from De Bruyne's injury, Guardiola also addressed the future of Riyad Mahrez at the Etihad Stadium, insisting that the £60m record signing will still be a City player next season and beyond, despite featuring only sparingly since joining from Leicester last summer.

Playing second fiddle to PFA Player and Young Player of the Year nominee Raheem Sterling, the Algerian winger has only started 13 Premier League games all season, and just three so far since the turn of the calendar year.

He knows and everybody knows there’s competition in the squad.

He is happy, we are happy.

"I don't need to speak with him - he will be with us next season. He knows and everybody knows there’s competition in the squad. He is happy, we are happy."