Milan vs Lazio: Where to Watch, Live Stream, Kick Off Time & Team News

​Milan host Lazio at the San Siro for the second leg of this Coppa Italia semi-final on Wednesday night.

The tie is in the balance following a 0-0 stalemate at the Stadio Olimpico in February's first leg, with Milan boss Gennaro Gattuso probably coming away the happiest of the two managers.

The sides met at the San Siro just last weekend in Serie A and it was Milan who edged that cagey contest thanks to a late second-half penalty, converted by midfielder Franck Kessie. Both Milan and Lazio were frustrated by their league fixtures on Saturday, as Milan were forced to settle for a point after a late Parma equaliser, while Lazio fell to a 2-1 home defeat to the league's bottom side Chievo.

Milan goalkeeper ​Gianluigi Donnarumma returned to the Milan lineup for Saturday's draw against Parma after recovering from a strain, with Lucas Paqueta fit enough to be named among the substitutes.

Midfielder Giacomo Bonaventura is still sidelined with a knee injury and will miss the rest of the season. Lazio midfielder Sergej Milinkovic-Savic was sent off against Chievo for a kick off the ball but red cards in Serie A don't carry over to Coppa Italia fixtures, meaning the Serbian is available to play.

Defender Stefan Radu is, however, suspended for this one after being sent off in the previous round against ​Inter. Jordan Lukaku and Valon Berisha are both sidelined until the summer.

Milan have won this fixture significantly more often than they have lost, but a draw is a common result. The points have been shared 59 times in 152 Serie A meetings - including four of the previous five in all competitions.

Last time out, Wednesday's hosts secured a 1-0 win over Lazio, who haven't won at the San Siro since 2015 when current Milan midfielder Lucas Biglia netted the winner. 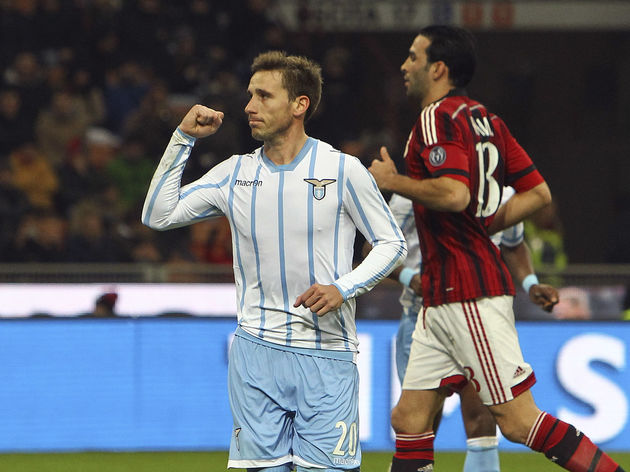 Gennaro Gattuso's side have earned just one victory in their previous six matches, which included a dramatic 3-2 derby defeat to ​Inter in March.

The boss criticised his side's performance in Saturday's frustrating draw, citing a lack of 'desire to get on the ball' as a factor.

Lazio's disappointing defeat to Chievo was their third defeat in five games, as they sit in eighth place in Serie A. If the last five fixtures are anything to go by, Wednesday night's clash is likely to be another cagey affair. But there has to be a winner on the night and Milan's mentality under Gattuso may just see them over the line.