​Manchester United have made an enquiry to Bayern Munich over the signing of defender Niklas Sule ahead of a potential summer move.

The German centre back has enjoyed a fine season in Bavaria in which he has established himself as first choice under Niko Kovac, ahead of seasoned compatriot Jerome Boateng. Sule even scored the winner in Saturday's 1-0 win over Werder Bremen.

"Before the goal I was screaming and praying for Thiago to see me. I'd taken two shots against Dortmund but hit the fence, like in American football. So it was nice I could decide it today, even though it took a deflection." #FCBSVW #MiaSanMia pic.twitter.com/FxcILsZb1n

The 23-year-old has been a key figure among a wave of young stars who look set to steer ​Bayern on course to their latest Bundesliga title this season. According to ​Sport1, Sule's impressive displays have led ​Manchester United to lodge an enquiry for the powerful defender.

Having conceded 48 goals in the Premier League this term, a number which exceeds that of all their top six rivals, United must seek to improve their defensive resolve next season.

Victor Lindelof has developed into a key figure at centre half under Ole Gunnar Solskjaer, but the likes of Chris Smalling and ​Phil Jones remain unconvincing, despite both recently signing new contracts at Old Trafford. 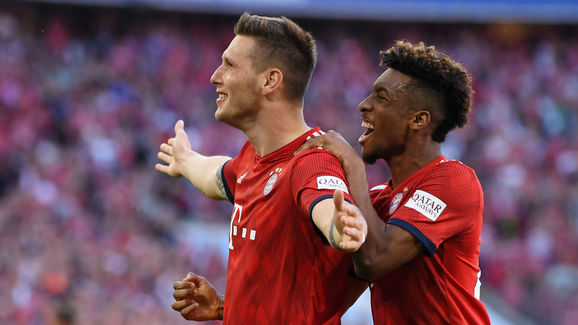 The recent elimination from the Champions League quarter finals at the hands of Barcelona was further evidence that the Red Devils do not possess a rear-guard capable of standing up to the top sides.

United were all too easily dispatched by Lionel Messi and co at Camp Nou and, if Solskjaer is to take his side forward next term, their defensive work must be worked on.

Kalidou Koulibaly has been regularly linked with a big-money switch to Old Trafford, but the Senegal international is likely to command a huge fee and, at 27, Sule could represent a better value long-term investment.

Back in #PL action and back on the road!  #MUFC pic.twitter.com/ypvMpU29da

However, given his rise to prominence as a key figure for Bayern this term, Sule is unlikely to come cheap, and United may have to dig deep into their vast finances this summer to land their top targets.