Cardiff City stunned hosts Brighton and Hove Albion on Tuesday night as they produced the perfect away performance to win 2-0 and pick up a desperately needed three points.

Defeat for Cardiff would have left them eight points from safety with 12 points left to play for and relegation to the Championship looking certain. However, Brighton never looked like winning this game and Cardiff twice took advantage and now head back to Wales with serious hopes of survival.

Brighton had most of the ball in the first half, although they didn't make it count as the Seagulls rarely threatened Neil Etheridge's goal. Just after the 20 minute mark had passed, the Bluebirds made them pay as their counter-attack was expertly curled into the corner by Nathaniel Mendez-Laing.

In their must-win game, Cardiff went into the break 1-0 up and 45 minutes away from a result to keep their hopes of survival in tact. Brighton, who were looking to bounce back from their disastrous 5-0 defeat at home to Bournemouth at the weekend, needed a much-improved second half to avoid being dragged into a relegation dogfight.

However, it took just five minutes for things to go from bad to worse for Chris Hughton's men as Sean Morrison headed in Victor Camarasa's floated free-kick. Brighton looked shellshocked and the Bluebirds pushed for an unlikely third.

As the home side looked to find a way back into the game, they failed to produce any clear cut chances as they came up against an immovable City defence.

Chris Hughton's side had the opportunity to all but earn another year of Premier League football, but instead have left themselves with serious fears of the drop. Following an embarrassing defeat at the weekend, many expected a fierce response from the Seagulls.

Instead however, the home side looked devoid of any creativity or imagination and sloppy defending allowed the away team to take advantage. Brighton will now be looking over their shoulders during a run-in where they face three of the top six teams. Rumours were circulating prior to this game that Brighton boss Hughton could be on the verge of the sack, and this result will have done nothing to convince the owners that he can lead them to survival.

Whoever is in charge for the Seagulls remaining fixtures will need to improve the side's performances immediately. If they continue in tonight's form, their Premier League adventure could be coming to an end soon.

In another lacklustre performance from Brighton, it is hard to pick a stand out player from their side. However, if anything was going to happen for the home side tonight, it was going to come from March, who looked a threat out wide.

His ball through to Murray in the opening minutes nearly gave the Seagulls the perfect start, were it not for the speed of Etheridge in the Cardiff goal. As Brighton chased for a way back into the game, they seemed to look to the English midfielder to spur them on. The 24 year-old did cause trouble with his delivery from set-pieces, but Morrison and Manga defended them brilliantly. They may not have got the result they wanted tonight, but Hughton may at least take encouragement from the performance of March and he can expect to feature heavily in Brighton's run-in.

Many had written the Bluebirds off going into this fixture, as they laid five points off their opponents at the start of play. With just one win in their last seven, it seemed as though Warnock's side had run out of steam and were set to return to the Championship.

They still sit two points behind Brighton, but what tonight's win will do is give hope to the fans and the players. With the easier of the run-ins between themselves and the Seagulls, fans will believe that survival is possible.

With winnable games to come, Cardiff will need to reproduce a performance similar to that of Tuesday night. Brighton have a difficult run-in, so it could prove that two or maybe even one result is enough for the Bluebirds to survive.

The former Blackburn man was the key to Cardiff's incredible victory at the AMEX Stadium on Tuesday night. The Canadian winger proved a threat to the Seagulls back line all night. He laid the ball off for Mendez-Laing to give Warnock's side the lead and continued to cause havoc even when in the lead.

Both wingers caused mayhem and the Brighton defenders couldn't handle their direct approach. Hoilett produced a perfect away performance for a wide player - providing a threat in attack and an outlet for his defenders when their backs were against the walls. 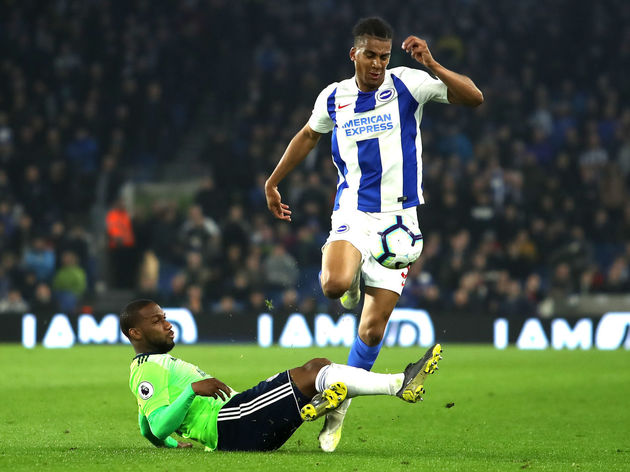 Defeat for the Welsh side would have left them staring down the barrel of relegation, so the performance of Hoilett came just at the right time. The winger will now have a key role to play in Cardiff's run-in, as they look to close the two point gap to Brighton and achieve the most unlikely of survivals.

​Next up for the south coast club is a tricky trip to Molineux. Seagulls will be hoping that Wolves will still be facing a hangover from their FA Cup semi-final defeat, as they will be pleased to come away with anything.

Cardiff host Liverpool on Sunday afternoon as they continue their bid for survival. However, Warnock may be tempted to rest key players with winnable games against Fulham and Palace to follow.