​Manchester United moved up to fifth in the Premier League, as they beat West Ham 2-1 on Saturday afternoon.

In the first half West Ham had the ball in the back of the net, but Felipe Anderson's fine strike was ruled out for offside. However replays showed that the Brazilian was in fact onside, as the Hammers were denied a perfectly legimate goal.

To rub salt in the wounds, Manchester United were awarded a penalty moments later, as Juan Mata was deemed to have been brought down by Robert Snodgrass. Paul Pogba stepped up, and found the back of the net emphatically to put United 1-0 up.

West Ham deservedly equalised four minutes into the second half, as Anderson got his goal. Manuel Lanzini played a wonderful cross into the box, and the Brazilian hooked his shot goalwards to draw the Hammers level.

However United were awarded another penalty with 12 minutes to play, as Ryan Fredericks fouled Anthony Martial. Pogba prepared to take his second spot kick of the afternoon, as he converted once again to restore the Red Devils' lead and secure all three points for United. ​Manchester United didn't produce their best performance, as they spent the majority of the game trying to keep up with West Ham. Though their first half performance was strong, they faltered in the second half and began to look lacklustre and tired.

Nevertheless, the Red Devils secured a huge victory in their bid to finish in the top four. Pogba's penalties did the job for United, and although it was far from a trademark performance, they secured a crucial three points in a must win game.

WHAT. A. SAVE. @D_DeGea with *another* super reflex save to deny Antonio — and now we have a penalty after a foul on @AnthonyMartial! #MUFC #MUNWHU pic.twitter.com/TUCddr1eIk

STAR MAN - Though ​Pogba's brace sealed the win, ​David de Gea played a crucial part in United's win. He pulled off a string of outstanding saves, and without his excellent performance between the sticks, the Red Devils would not have gone on to win. West Ham's performance was interesting - while they played free-flowing football in attack, their passing was sloppy as they gave the ball away too often. They deserved to take something from the game, but a moment of rashness from Fredericks completely undid West Ham's hard work.

The Hammers greatly improved in the second half, as they got a deserved equaliser. Although they outclassed their hosts in the final 45 minutes, one poor tackle in the final stages of the game ruined an excellent Hammers performance, as they went home empty handed.

14 - Felipe Anderson has scored his first Premier League goal in 14 games, and become the first @WestHamUtd player to score home and away vs Man Utd in the same league season since Jermain Defoe in 2001-02. Levelled. #MUNWHU

STAR MAN - Felipe Anderson was excellent for the Hammers, scoring their only goal of the afternoon and producing an outstanding performance in attack. He caused United's defence problems all game along, and played very well despite West Ham's defeat. 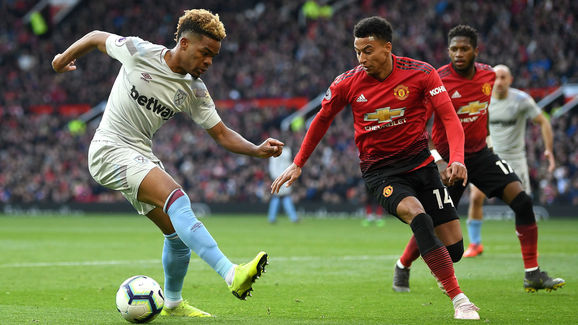 ​Manchester United have a huge trip to the Camp Nou in the Champions League, as they face

in their quarter-final second leg. They return to league action next Sunday, travelling to Merseyside to face ​Everton.

West Ham are back at London Stadium next Saturday, as they entertain Leicester City. The Hammers then face a big London derby on 27 April, as they travel to rivals ​Tottenham in the day's early kickoff.