Manchester City Women host Chelsea Women on Sunday afternoon, as the two sides battle it out for a place in the Women's FA Cup final.
It is a mouth watering semi-final tie, as the two most recent winners of the competition face off at the Academy Stadium. City are looking to repeat their 2017 success, as well as avenging their semi-final defeat to the Blues in last season's competition.

​Chelsea travel to Manchester as the defending FA Cup champions, as they hope to win the famous trophy for the third time in five years. The Blues could become the tenth team to win back-to-back FA Cups, and the first to do so since Arsenal in 2014.

​​The winner of Sunday's tie will play either Reading or West Ham, who are in action in the first semi-final hours earlier on Sunday afternoon. ​Both Nick Cushing and Emma Hayes should have full strength squads for this weekend's FA Cup tie, with neither manager having any new injuries reported.

​Manchester City will be relying on their two inform strikers in Georgia Stanway and Nikita Parris, who could start together up front. The duo have a brilliant record in the Women's Super League this season, with 29 goals and nine assists combined.

​Chelsea will meanwhile be hoping for a matchwinning performance from Bethany England, whose individual goalscoring stats are just as impressive. The English forward is one of the Blues' top scorers this season, with eight league goals to her name. 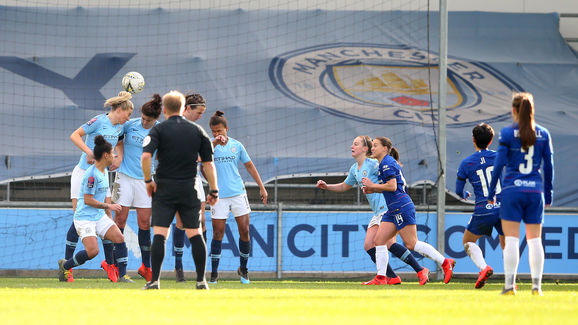 ​It seems that City and Chelsea face each other every other week, as they prepare for their 13th meeting in less than five years. This will be the fourth encounter between the Sky and Royal Blues this season, with four of the last five games ending all square.

They last met in February, as Chelsea snatched a late 2-2 draw in the league. The Citizens had gone 2-0 up through Tessa Wullaert and Georgia Stanway, before a second-half brace from Chelsea's Ji So-yun which included an 89th minute free kick snatched a point for the Blues.

City beat Chelsea on their way to winning the Continental Cup earlier this season, ​winning 2-0 in February. The Blues are still searching for their first win at the Academy Stadium, while the Citizens are looking to extend their 11-game unbeaten run over Emma Hayes' side. Manchester City are in outstanding form, on an incredible 23-game unbeaten run in all competitions. City's last defeat came in a 2-0 Champions League loss to ​Atletico Madrid last September, while they remain unbeaten in domestic games and sit second in the league.

Chelsea haven't lost in domestic action since their Continental Cup semi-final defeat to City in February, falling to one sole defeat in the Women's Super League this year. The Blues are also still in Europe, with an upcoming ​Champions League semi-final clash against Lyon.

City reached the semi-finals by beating ​Watford, ​Tottenham and ​Liverpool, all by convincing 3-0 scorelines. Chelsea defeated ​Everton, ​Arsenal and Durham to reach the final four, as they too have yet to concede in this year's competition. Sunday's semi-final tie is sure to be a superb game of football, as two of England's most successful sides of recent times face off. Both City and Chelsea have been in excellent form this season, as well as maintaining perfect runs in the FA Cup.

Though Chelsea will surely not go down without a fight, Manchester City will likely be too strong for the visitors. They should be able to capitalise on their strong record and domestic form, as they secure their berth in this season's FA Cup final.