Collectively known as the 'The 99ers', many of the squad had been together for a decade and had already experienced World Cup glory in the inaugural FIFA tournament in 1991. But the second time in 1999 really captured the imagination of the public in American and beyond.

Most of the squad even met up for a public 20-year reunion earlier this month (below). Here's a look at the team that started the final against China and where they are now... Scurry played a decisive role in the 1999 final when she saved the penalty of Chinese midfielder Liu Ying. By that point she had been the number one goalkeeper for five years and would keep her place until the rise of Hope Solo.

She played 173 times for the USWNT during a 14-year international career, also winning two Olympic gold medals either side of 1999 World Cup glory.

After hanging up the gloves for good in 2010, Scurry had a spell as general manager for now defunct club MagicJack and was later hired as an assistant coach at Washington Spirit in 2017. 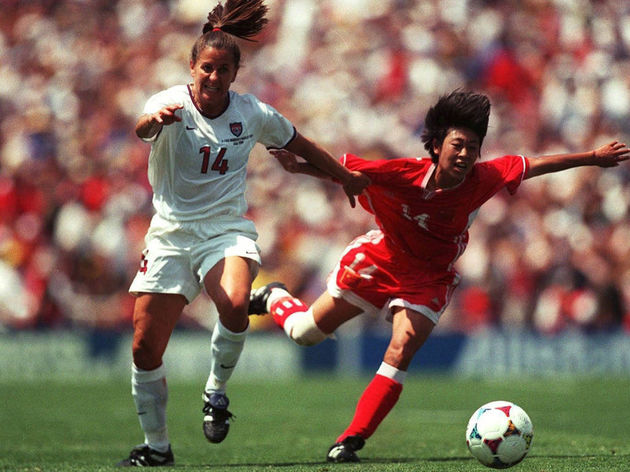 Despite being a defender, it was Fawcett who scored the winning goal against Germany in the 3-2 quarter final en route to lifting the trophy in 1999.

Olympic gold in 2004 was Fawcett's last triumph and she is now an assistant coach with the U.S. Deaf Women's National Team. 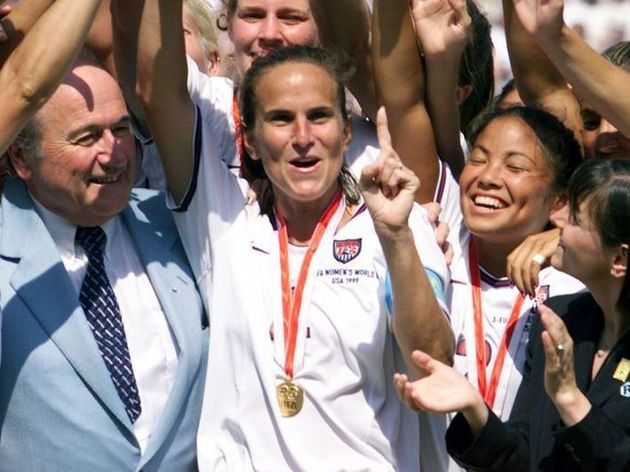 As captain of the team, Overbeck converted the opening penalty in the 1999 final shootout. It was already her second World Cup as skipper, after leading in 1995, while she had also been part of the triumphant 1991 squad as well.

The defender remained captain until retiring in 2000 after that year's Olympics.

Overbeck graduated from the University of North Carolina in 1990 and fairly soon began work as an assistant coach for the women's soccer team at Duke University. She balanced that with the remainder of her own playing career and has now served the team for more than 25 years. 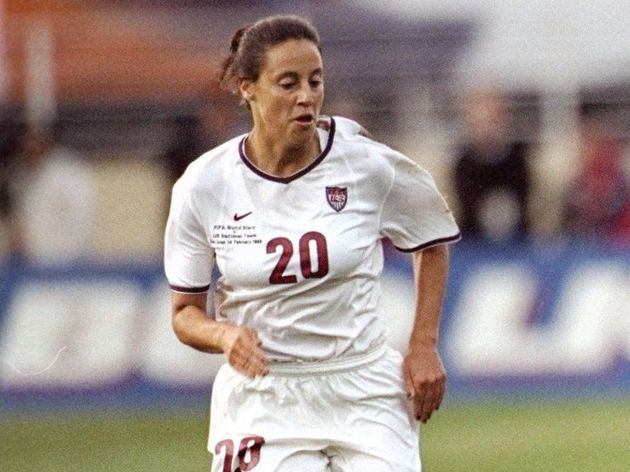 Now known by her married name (Markgraf), Kate Sobero has become a prominent broadcaster in her post-playing career, commentating on both women's and men's games – including multiple Women's World Cups and Euro 2016 – for American networks.

On the pitch, her international career had begun in 1998 and she was the second youngest U.S. player to start the 1999 final at the age of just 22.

Sobrero remained a USWNT fixture until 2010, adding two Olympic gold medals to her World Cup success in 2004 and 2008 and playing just over 200 games in total. Chastain created one of the most iconic moments in football history when she scored the winning penalty in the 1999 final, removing her shirt and falling to her knees in celebration.

The versatile Chastain had been on the USWNT roster since 1988 and remained there until 2004, eventually retiring with 192 caps, 30 goals, two World Cups and two Olympic gold medals.

In retirement, she has worked in broadcasting for several networks, as well as appearing in commercial endorsements. She has also continued to speak up for greater equality. At the age of 33, Akers was the veteran of the '99ers' team and had first pulled on the USWNT jersey as early as 1985 when it was first formed. She was initially a prolific forward, winning the Golden Shoe as top scorer at the 1991 World Cup after scoring 10 goals in six games.

In 1991 alone she scored 39 goals, but dropped into a deeper midfield role in the mid 1990s and continued to enjoy success as part of the team that won Olympic gold on home soil in 1996.

Akers retired ahead of the 2000 Olympic Games as injuries began to take a toll. In the years since, she has remained a prominent spokesperson and advocate for the women's game. Over 16 years between 1988 and 2004, Foudy appeared 245 times for USWNT and is fourth on the all-time cap list. Her activism against child labour also yielded a FIFA Fair Play award in 1997.

But not only is she an iconic name in the history of women's soccer as a two-time World Cup winner and two-time Olympic gold medalist, Foudy has also become a household name as a broadcaster over the last 10 years as well.

Foudy's media career has included working as a co-anchor, commentator, reporter and pundit for multiple networks on various events from men's and women's World Cups, to European Championships, the MLS Cup and Olympic Games. Lilly represented the USWNT for an astonishing 23 years after making her debut in 1987 and playing her 354th and final game in 2010. As such, she holds the all-time appearance record.

A North Carolina Tar Heels alum, she was part of every major success the team enjoyed in the 1990s and early 2000s, winning two World Cups and two Olympic gold medals, only missing a third Olympic triumph in 2008 to give birth to her first child.

Lilly took on an assistant coaching role with club side Boston Breakers after retiring. The team disbanded in 2018, but she remains a prominent voice as a former player and is also a published author and co-founder of a soccer academy. Hamm was the undeniable star of the 1999 team, even appearing in a television commercial alongside Michael Jordan. She had numerous sponsorship deals, a Nintendo 64 game bearing her name, and was even referenced during an episode of iconic sitcom Friends.

On the pitch, Hamm's 17-year international career, which began at the age of just 15, yielded 276 appearances, third all-time, and 158 goals, second all-time. Like a number of this generation, she won two World Cups and two Olympic gold medals.

Hamm has continued to be heavily involved in football, becoming a global ambassador for Barcelona in 2013. A year later she was named on the board of directors at Roma following American investment and also became a minority owner in new MLS franchise LAFC. The youngest final starter among the '99ers' at the age of 21, Parlow arrived on the international scene in 1995 and would be a part of the setup for 11 years, scoring 75 goals in 158 games.

Like many of the others, she was won Olympic gold medals in 1996 and 2000, but back and head injuries contributed to her retirement in 2006, leading to a college coaching career.

Parlow became the new vice-president of U.S. Soccer in February 2019 after announcing her candidacy last year, having previously being actively involved in the Athlete Council for over 20 years. Milbrett is one of only seven players in USWNT history to reach a century of international goals, scoring exactly 100 times in 206 games during her career.

A native of Portland, Oregon, she was actually the team's top scorer at the 1999 World Cup after scoring three times, two of which came in a 7-1 group stage win over Nigeria.

Milbrett finished her 15-year USWNT career in 2006 and continued to play at club level in a handful of countries until 2011. In retirement, she has coached at grassroots level. DiCicco led the USWNT from 1994 to 1999. He later coached club side Boston Breakers and was an analyst for ESPN and Fox during the last Women's World Cup, before sadly passing away in 2017 at the age of 68 after a battle with cancer.