Champions League: Players Who Have Missed the Most Penalties in the Competition's History

​After being awarded a somewhat dubious penalty by

It was, surprisingly, the fourth penalty the mercurial Argentine has missed in the Champions League; the second most in the competition's history.

3 - Hugo Lloris has saved all three of the penalties that he has faced with Spurs in all competitions in 2019, stopping efforts against Leicester City, Arsenal and Manchester City tonight. Imposing. #TOTMCI pic.twitter.com/Z15lJ1miq5 Simply due to the magnitude of both these players' misses, they are the two that will unfortunately be named in the sub-heading for this section.

There are an absolute boatload of unfortunate stars who have missed penalties in the Champions League, either via skying it into Row Z or being undone by some goalkeeping wizardy. In the case of the Riquelme, his penalty was not only quite frankly rubbish, it came in 88th minute of their semi final second leg match against Arsenal, where a converted penalty would have forced extra time following a 1-0 first leg defeat. For a player who was often regarded among the best of Argentina at the time, it was a bitterly disappointing attempt.

Picture the scene. It's the final, you're in front of your own supporters at your club's ground, the first period of extra time, against your former club, a match you've dominated could be decided on this penalty. You shoot...you miss. Poor old Robben arguably missed one of the most crucial UCL penalties ever in 2012, as ​Bayern Munich eventually were beaten in a penalty shootout to Chelsea. He won it the next year, mind. He's actually missed as many as he has scored in this competition, both coming when the Brazilian was plying his trade for Barcelona.

In both occurrences it meant little, though. La Blaugrana battered Roma 6-1 at home back in 2015, as Wojciech Szczesny comfortably saved his weak effort. A year on it was Willy Caballero who saved a Neymar penalty, although the other four goals he let in meant it wasn't the greatest consolation in the world. 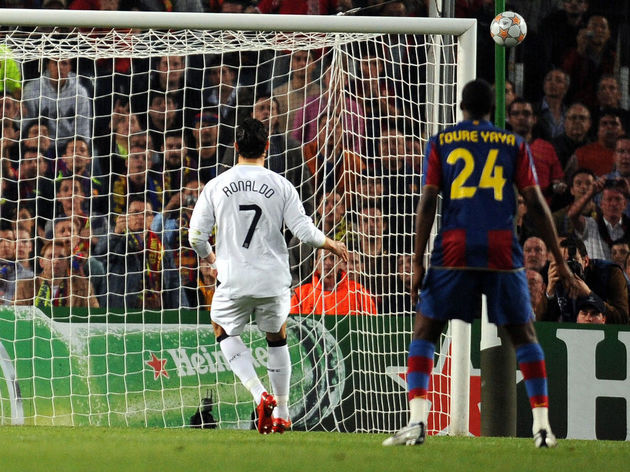 Ronaldo's first miss came with ​Manchester United back in 2008, as his semi final first leg miss against Barcelona went unpunished​ - Paul Scholes sending them into the final with the only goal of the tie in the return leg. His other misses came against European footballing giants PFK Ludogorets and FC Copenhagen while playing for ​Real Madrid.

A certain ​Messi has had Joe Hart stop one of his spot kicks, just one of 25 he has missed throughout his career; his other two UCL misses came against ​Chelsea (as the Blues drew 2-2 at the Camp Nou to reach the final) and Panathinaikos. 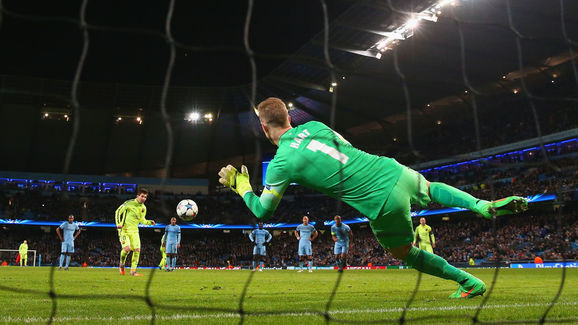 The Blues' Belgian maestro has come unstuck on three occasions as well, however, fortunately for him in slightly more subdued occasions. Failure to convert from 12 yards came against FC Nordsjaelland in a 6-1 drubbing, against NK Maribor in a 1-1 draw and Maccabi Tel Aviv in a 4-0 win. Van Nistelrooy was unable to convert against Olympiakos (twice), FCSB and Lyon to add to a total of 12 penalty misses in all competitions, yet finished his career knowing one other unfortunate star fluffed his lines more times than he did. Again, more fondly remembered for one of the Premier League's most humorous moments from 12 yards, Henry does indeed hold the accolade for the most penalty misses in Champions League history (so far).

On only one occasion did he end up on the winning side during his five misses, back in 2000 as Arsene Wenger's men ran out 3-2 winners over Shakhtar Donetsk. Two years later the Frenchman missed twice in ​Arsenal's second group stage (that's how it was back then), failing to score against Juventus and Deportivo La Coruna as they finished third. 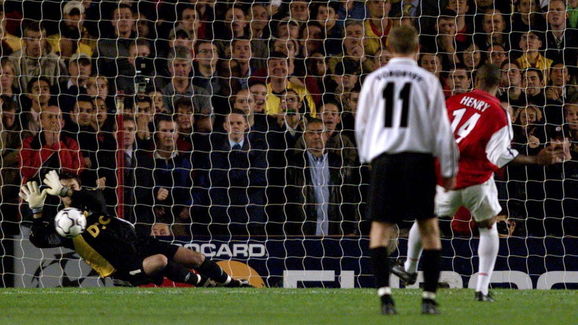 The year after he continued his hot streak by missing in a crushing 3-0 home defeat against Inter in the groups, before rounding it all off with missed effort in a goalless draw against Ajax in 2005. Considering he told Jens Lehmann to dive the other way for the aforementioned Riquelme miss, it's fair to say penalties weren't his forte.