Borussia Dortmund were haunted by their former players in the Bundesliga's 100th instalment of Der Klassiker as Bayern Munich returned to the top of the table with a 5-0 win over Lucien Favre's side.

It was actually Borussia Dortmund that had the first chance with their first counter-attack of the match, but Roman Bürki did his best to keep the scoreline down by half-time, but once again Dortmund struggled to deal with a set-piece and Javi Martinez was unmarked on the edge of the area to get his name on the scoresheet, while Serge Gnabry added a fourth just before half-time.

Lewandowski then ensured he was Der Klassiker's outright top goalscorer by adding another late on in the match, overtaking

Robert Lewandowski's first goal of the game saw him reach 200 goals in the Bundesliga, a tally which only legendary striker Robert Lewandowski might have grabbed all the headlines in Bavaria, but two of Bayern Munich's defensive players put in world-class performance which went under the radar in Der Klassiker.

Midfielder Javi Martinez bossed the battle with Axel Witsel and Thomas Delaney, but it was Mats Hummels who provided Bayern Munich with the platform to show off all of their attacking class.

Lmao at all the haters who have been trashing Hummels this season. He is on FIRE ⚪#MatsHummels #DerKlassiker #FCBBVB #MiaSanMia

Mats Hummels seems to have a magnet in his head today, the ball keeps finding it. #FCBBVB @FCBayernUS

It's hardly news for Borussia Dortmund that they need to work on set pieces, but in Der Klassiker, every dead ball situation gave Bayern Munich an easy route to goal.

Defensive work from free-kicks and corners has often proved to be Dortmund's undoing against the league's smaller teams in the past, but Saturday's hosts exploited their weakness to devastating effect. 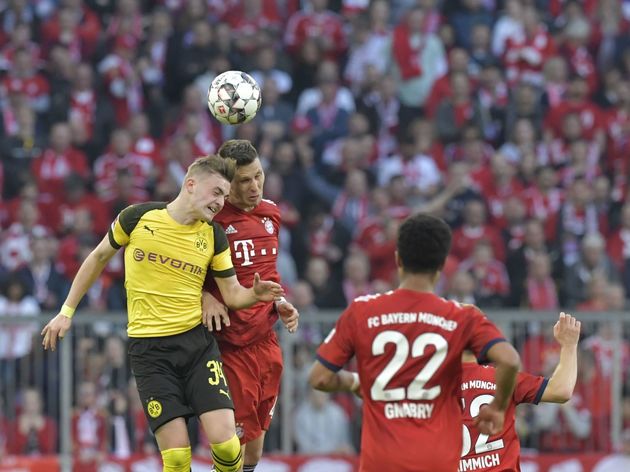 The partnership of Manuel Ajanji and Dan-Axel Zagadou was helpless in the air throughout the first half, while Julian Weigl's introduction and the break didn't do much to sure up their problems in their own final third.

It's hard to believe that Borussia Dortmund's best player during a crushing defeat was their Swiss international goalkeeper, but without

Roman Burki has allowed 3 goals and is the best player for Dortmund. Bayern could have 5 or 6 if not for Burki

Both sides can have a breather in mid-week following their exit from the Champions League, but Bayern Munich will be looking to flex their muscles against