Crystal Palace secured a huge win in the late stages of the game, as they beat Newcastle United 1-0 on Saturday afternoon.
Both sides were denied a first half lead, with referee Stuart Atwell disallowing goals from Salomon Rondon and James Tomkins. The latter's goal was disallowed far more controversially, as James McArthur was deemed to have been obstructing goalkeeper Martin Dubravka.
The second half was marred by two serious injuries, with Newcastle first seeing Florian Lejeune carried off on a stretcher. Soon after Crystal Palace had an injury of their own, with James Tomkins pulling up with a hamstring injury.
With ten minutes to go, Palace were given a huge lifeline as they were awarded a penalty for DeAndre Yedlin's foul on Wilfried Zaha. Captain Luka Milivojevic stepped up, and sent Dubravka the wrong way to tuck his spot kick home and secure a huge three points for the Eagles.

10 – Newcastle are winless in all 10 of their Premier League games against London clubs this season, drawing two and losing eight. Sorrow. #NEWCRY pic.twitter.com/dFvb2L1JHD

​Newcastle played well and certainly could've taken all three points, as they had some good chances to take the lead in the first half. They were unlucky to have Rondon's goal disallowed, but they kept up their momentum and continued to press their visitors' defence.
The Magpies were pushing for the win and would've been happy to settle for a point, but a moment of stupidity from Yedlin saw all of their hard work undone. It was a frustrating defeat for Newcastle, who will feel hard done by and furious with the way they lost the game. 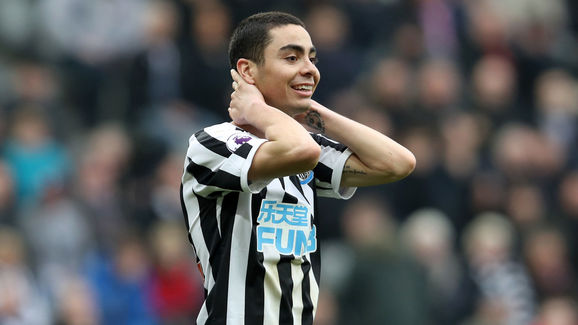 STAR MAN - In a disappointing result for the Magpies, Miguel Almiron played very well in attack.

He was energetic throughout the game and used the ball well to create chances for the hosts, as he produced a promising performance in Newcastle's defeat. ​Crystal Palace were far from their best, but they were good throughout the game and played some excellent football at times. There were many times where the Eagles simply didn't take their chances, but they stayed resilient and fought on until the end.
Though Palace required a bit of luck to earn the penalty, Milivojevic took his chance and converted the visitors' first shot on target. It wasn't pretty but it was a huge win for the Eagles, as they moved up to 12th and took a huge step in the right direction away from the relegation zone. STAR MAN - In another standout performance from the Eagles' star man, ​Wilfried Zaha was excellent. His trickery and superb play in the final third was key to every Palace attack, as well as winning the crucial penalty in a man of the match performance. Newcastle next play in just under a week, when they travel to ​Leicester City on Friday night. They then return to St. James' Park on 20 April, as they host fellow relegation battlers ​Southampton on Tyneside.

Meanwhile Crystal Palace have two huge tests ahead of them, starting with the visit of ​Manchester City to Selhurst Park next Sunday. They then face a big London derby across the river, travelling to ​Arsenal on 21 April.