Germany's showpiece fixture is hardly what many would consider a textbook rivalry, as Bayern Munich and Borussia Dortmund's animosity only really started to grow during the early 1990s.

However, Der Klassiker is now one of the most sought after fixtures on the footballing calendar around the world, with the classic game set to have its Bundesliga centenary this weekend when the two sides meet in one of the most highly anticipated clashes in years.

Here's a look back at six of the best moments from the last 54 years of Der Klassiker.

The first-ever meeting between Bayern Munich and Borussia Dortmund didn't take place until 1965, and prior to the Bundesliga forming two years earlier, football clubs played in their local regions.

When the two sides did eventually meet at Bayern Munich's old

BVB's versatile star Reinhold Wosab - who played in defence, midfield and attack throughout his career - combined with Lothar Emmerich to 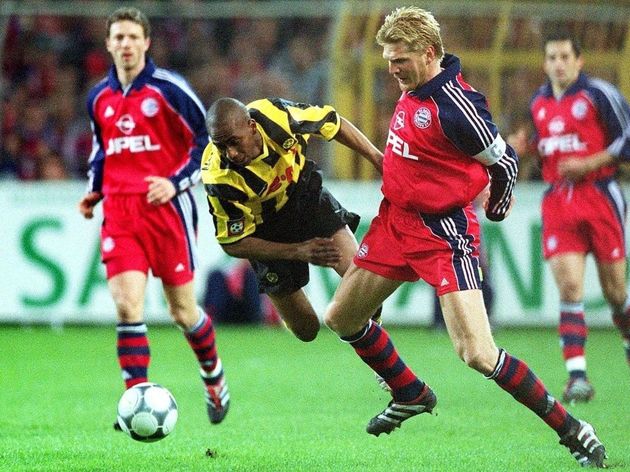 It will come as no surprise that the Bundesliga's record for the most yellow and red cards in a single match came was during Der Klassiker.

When the two sides met back in 2001, Roque Santa Cruz wasted no time in getting Bayern Munich on the front foot by firing a right-footed effort past Jens Lehmann and into the back of the net.

That was the last of the goals for the first half, but six players had received yellow cards by the time the half time whistle went, while Bayern Munich's Bixente Lizarazu - who set up

Fredi Bobic pulled Borussia Dortmund back on level terms just after the restart, and things went from bad to worse for Bayern Munich when midfielder Stefan Effenberg picked up a straight red card soon after.

While there wasn't enough time for either side to grab a winning goal, the cards continued to be dished out throughout the second half. In total, 12 yellow cards were shown at the Westfalenstadion, while Evanilson's late sending off ensured three players who started the match didn't finish it. Well before Bayern Munich and Borussia Dortmund became the fierce rivals that they're known as today, the two clubs were involved in a 12-goal thriller which stands today as the Bavarians' record win.

Willi Hoffmann scoring in between.

Hoeness then notched his second of the match just after the break, something which sparked a 15-minute spell which saw five goals fly into the back of the net to leave the scoreline at 8-1 to Bayern Munich with 25 minutes left on the clock.

Müller then added two more either side of a second goal from Franz Roth to secure the club's biggest ever win, while Dortmund's 11-1 defeat would be Alcácer's aforementioned chip by no means settled the Bundesliga title race this season, but a penalty save from former goalkeeper Ilkay Gündogan brought Borussia Dortmund back into the game from 12 yards after Marco Reus was fouled in the penalty area.

The Champions League final looked set to be going to extra time when, in the 89th minute, a half-hearted backheel from