Fulham's relegation from the Premier League was confirmed on Tuesday night, as Watford beat claimed a 4-1 victory at Vicarage Road.

​Watford made their breakthrough in the 23rd minute thanks to Abdoulaye Doucoure's powerful strike from the edge of the box. The Frenchman fought his way through a patchy Fulham defence, and scored emphatically to put the Hornets in front.

Fulham drew level soon after, as Ryan Babel went round Ben Foster and duly finished. It was Babel's second goal in his last three league games, as the Cottagers got themselves back into the game.

It took until the 63rd minute for Watford to regain their lead, thanks to a stunning volley from Will Hughes. The midfielder picked up the ball from inside the box, and struck it sweetly into the roof of the net to restore the hosts' lead.

The Hornets earned a two-goal cushion six minutes later through Troy Deeney's sidefooted shot, before a powerful strike from Kiko Femenia all but wrapped up the three points for Watford ​as well as Fulham's fate.

Here's our breakdown of this one Watford were ruthless at Vicarage Road, but despite the emphatic scoreline it was a lacklustre first half. Despite going ahead, they gave the visitors far too much time and space in their box, which eventually led to them conceding the equaliser ten minutes after the opening goal.

However Javi Gracia made two superb tactical changes at half time, bringing on Daryl Janmaat and Andre Gray. The new additions revitalised Watford and gave them a new burst of life, with Gray getting two assists as the Hornets scored three times in 12 minutes.

It was a deserved win in a clinical second half display, and it was the perfect reaction to last weekend's ​disappointing defeat to Manchester United. The Hornets will be delighted with the result, as their attention now turns to the FA Cup and a potential cup final.

10 - Abdoulaye Doucouré has scored more league goals from open play (10) than any other Watford player since the start of last season. Crackerjack. pic.twitter.com/MKgBbEOkbJ

STAR MAN - Though there were many outstanding performers for Watford, Doucoure was once again outstanding.

Repeating his typical performance from Old Trafford, he scored a deserved goal as he controlled the game excellently from midfield. It seemed to be the final nail in the coffin when ​Fulham went behind, but they fought their way back into the game as they seemingly earned a lifeline. The Cottagers had so many chances to take the lead, but could not take advantage of their presence in the final third.

Scott Parker's side eventually lost their momentum in the second half, as Fulham's defence crumbled as it has so otfen this season to concede three devastating goals. It finally confirmed the west Londoners' relegation, having only been promoted to the ​Premier League last year.

Fulham now follow ​Huddersfield in relegation to the ​Championship, following the Terriers' ​2-0 loss to Crystal Palace last Saturday. It brings a disappointing climax to Fulham's season, as their Premier League journey came to a tragic end at Vicarage Road. 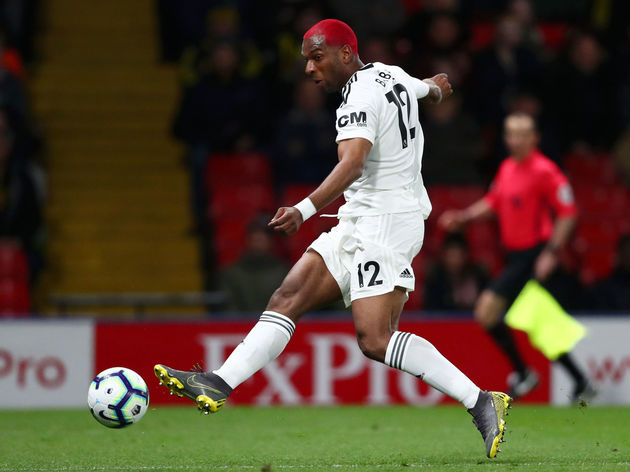 STAR MAN - There were so little positives for Fulham, but Ryan Babel's goal was certainly a brief moment of elation.

The Dutchman's strike helped the Cottagers get back into the game, but it wasn't enough in a bitter defeat for the west Londoners. Watford next two games are huge, starting with Sunday's FA Cup semi-final against ​Wolves at Wembley. The Hornets return to league action on 15 April, when ​Arsenal visit Vicarage Road.

Fulham aren't in action until the following Saturday, when they host ​Everton at Craven Cottage on 13 April. The following week they travel down to the south coast, playing ​Bournemouth on 20 April.
Related Topics:
Transfer News